I had a makeup lesson to do with a 3rd grade class and since the Day of the Dead had already passed, I thought it would be better to have them base their project on something and someone else.

I chose San Diego artist and educator Kim MacConnel as the inspiration for their project. I don't know why I have never done something based on his visually engaging work before. MacConnel's work has explored the possibilities of pattern and decoration for 40 years. He often uses simple shapes that are repeated, along with bright, highly saturated colors in his paintings. There is a minimal amount of overlapping. Most of his shapes butt right up against one another in ways that can create a sense of vibration and energy. He pulls his patterns and images from historical and contemporary sources and gives them new life in his abstract paintings. 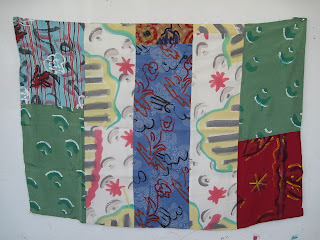 Basing the lesson on MacConnel's work was a bit of a departure from the previous two lessons the class had done exploring 3d space, but it also revisited the use of contour line and geometric shapes in art. The emphasis of this project was to create an image that was about decorative space and not 3d depth.

We discussed and identified his use of patterns with shapes, lines, and colors in a number of paintings before students created their own versions of his work. 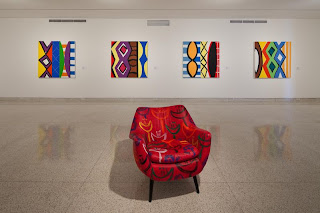 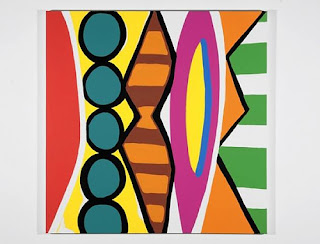 1. students were given a white large rectangle to serve as the base of their collage and a wide orange strip as the first element they would add
2. students glue orange piece in place- on right, in center, on left
3. students select from 2 colors and design a pattern on it. cut out and glue one piece on the orange and one piece on a white space
4. students then designed a pattern on a bright blue sheet and cut it out and glued it onto empty spaces in their design
5. students were given 2 smaller pieces to use to make shape patterns on top of the patterns they created with line
6. students chose 2 crayon colors and added line patterns to existing shapes in their collage
7. students used a black crayon to reinforce edges with contour lines around shapes and/or patterns

The results from this one class have me excited to try this project out with other classes and grade levels. I have 10 foot long canvases and I think I my have classes create mural size MacConnel's on those using acrylic paints.

Due to the amount of cutting and gluing this project took approximately 1 hour and 15 minutes. 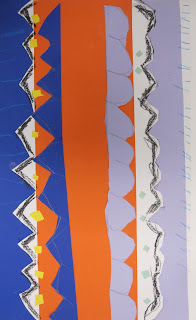 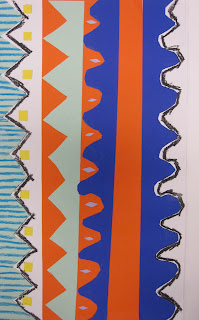 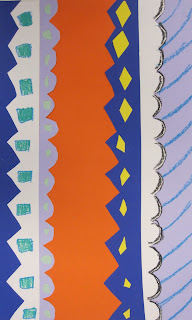 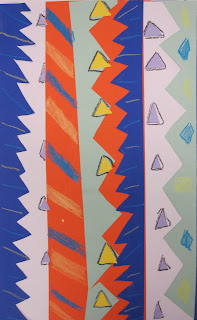