This 5th grade subtractive carving project was based on the colossal head sculptures of the Olmec civilization. This civilization predates the Mayan and Aztec in modern day Mexico. During the reign of this group, artisans produced large scale heads, which many people now believe to be portraits of rulers of the Olmec. 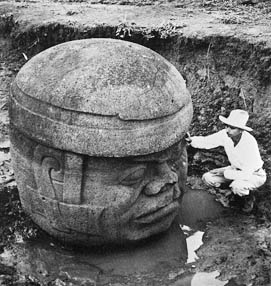 These heads weighed as much as 8 tons and were carved out of basalt, which is a volcanic rock. 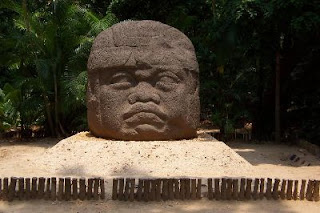 After introducing students to these Olmec sculptures, we started in on our own versions of portrait head sculptures. Using basalt was out of the question for 2 one hour lessons, so we used the styrofoam plants are placed in for floral arrangements. I demonstrated how to plan out a typically proportioned face, so that the head showed symmetry and the facial features "fit" with one another.

After the carving was completed, students dunked their heads into a diluted white tempera paint solution to give them  more of a stone-like appearance.

This was definitely challenging for students because if they carved to far or broke parts off, they could not reattach those parts. If this happened,  pointed out that their sculpture looked like it was aged and weathered like some of the Olmec heads were when they were discovered.

This is a messy project. Very dusty as students are carving away. I suggest working in a well ventilated area. Outside if possible. 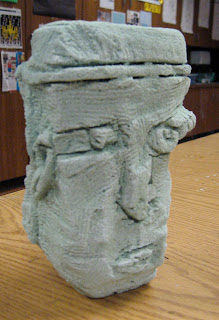 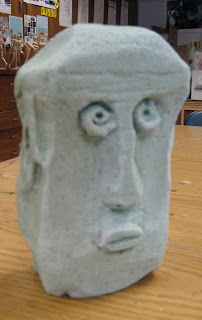 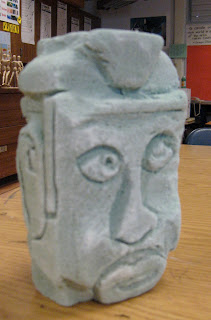