Wow! We just returned from our 4 week spring break today. I really didn't think I could not post for so long, but I "surprised" myself. Off and running with the 2nd and 5th grade classes for the next 4 weeks.

One of the 2nd grade standards focuses on creating 3d space through overlapping, vertical placement, and size change. I throw value change into the mix as well. I found the work of illustrator Dante Terzigni through Pikaland and thought his work could work well introducing students to these concepts while offering an image that made them think, "Why did he (Dante) do that?" They're always wondering why I do things:)

I gathered some info off his website to share with students before digging into the hands on project. One tidbit was that he graduated from college in 2003, the same year that many of our 2nd graders were born. I talked about how he drew on paper for planning his ideas, but used a drawing tablet plugged into a computer to create his final illustrations.

When looking at some examples of his work, students were able to tell me that his shapes looked flat and kind of different, even though the shapes were based on real things. We also found out that even though his individual shapes looked flat, Dante created depth by changing the size, placement, and value of those shapes. 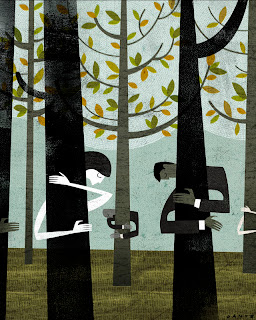 For the project, I decided to focus on an image of his called Flower Factory. Students identified the elements used to create 3d space in the image and then I asked them why Dante might have made the image. Many answers centered on him using his imagination. A few went further and addressed the need to make things look nicer, or to protect ourselves from the bad smoke that would come out of a factory. 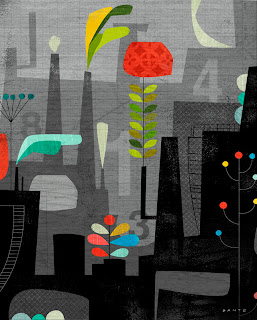 The students approached the project as a collage. They built the 2 layer city first, and then added stems and leaves, followed by the flower tops. I demonstrated where to start the layers of the city, but also stressed the desire for their concepts to look different than mine.
Some of the cityscapes look more natural than I was expecting, but they still demonstrate the necessary elements of 3d space that were required.
Some students in each class did not finish, so I will give them a few more minutes next week. These students that already finished can add some subtle pattern elements with pencil and crayon, so that their images have a bit of the variety in texture that makes Dante's designs visually richer. 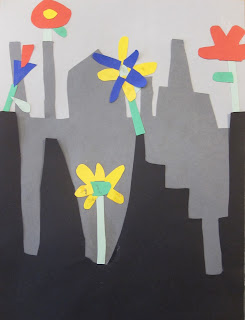 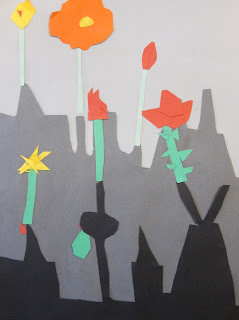 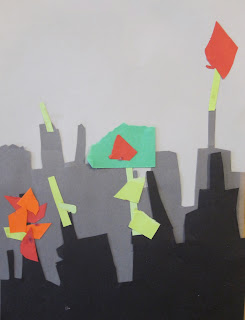 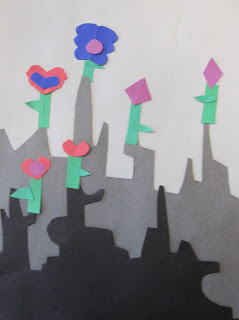 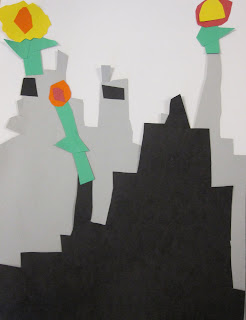 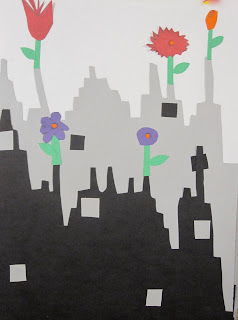