it's a small world. 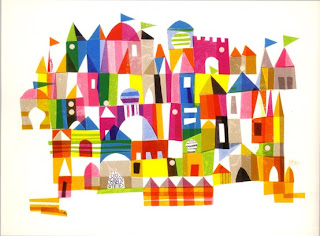 This is another project that was inspired from an artwork that I had pinned a bit ago. When I saved the image I was not familiar with  the artist who made it. I liked the feel of it. Simple geometric shapes, patterning, and brightly colored. The image reminded me of the work of Rob Dunlavey, who I had done projects based on last year.

Well, after googling the artist's name I quickly discovered that this Mary Blair was not a contemporary artist, but a legend in the canon of Disney art and animation. For many years she worked for ol' Walt and she was the art director of animated classics such as Cinderella, Alice in Wonderland, and Peter Pan. She created the look of those films. When Disney was building a little them park in LA he asked Mary lend her considerable design talent to a number of attractions. Mary was the visionary behind the facade and interior world of.... It's a Small World. I love the front of that building and here, I had stumbled across it's creator. Cool to say the least. Very cool. 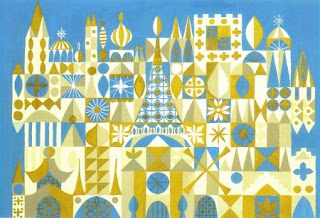 I really enjoyed being able to share the design work of this trailblazer for women in animation and creative design. Since we are only an hour and a half from the theme park itself, most of the kids in my 5th grade classes had already seen her work firsthand.
While most agreed that the art of the attraction was great, there was more debate on whether the song needed to be played throughout the entire ride:)
After viewing photos of Mary and some of her "cityscapes", we got going on creating our own small worlds. The emphasis was on using a limited range of geometric shapes to create unity in the image. The students could add variety by using different sizes, colors, and patterns to their buildings. We also discussed how animators that work on cartoons that look hand drawn rely on contour lines to define their characters and shapes.
Students drew out the basic building shapes first, then added different tops and patterns to them. Befor students started to color I pointed out that the contour lines present in their pencil drawings would disappear and be replaced by implied lines because we would see the edges of shapes only when two different colors met up in the composition.
The only thing I would change about the lesson would be to reduce the paper size. Students were working with a 12x15" sheet. A bit too much to fill in the 40 minutes of coloring time they had, after my intro and the pencil drawing. 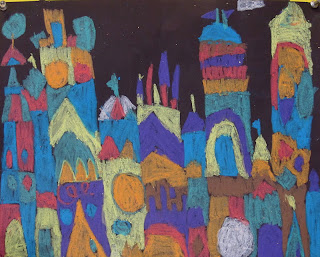 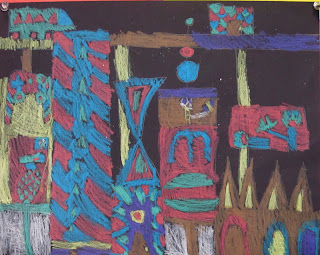 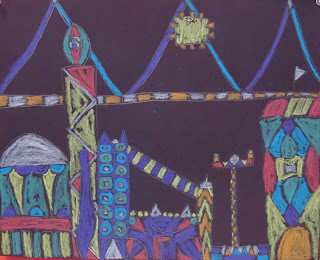 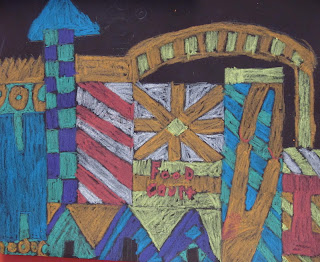 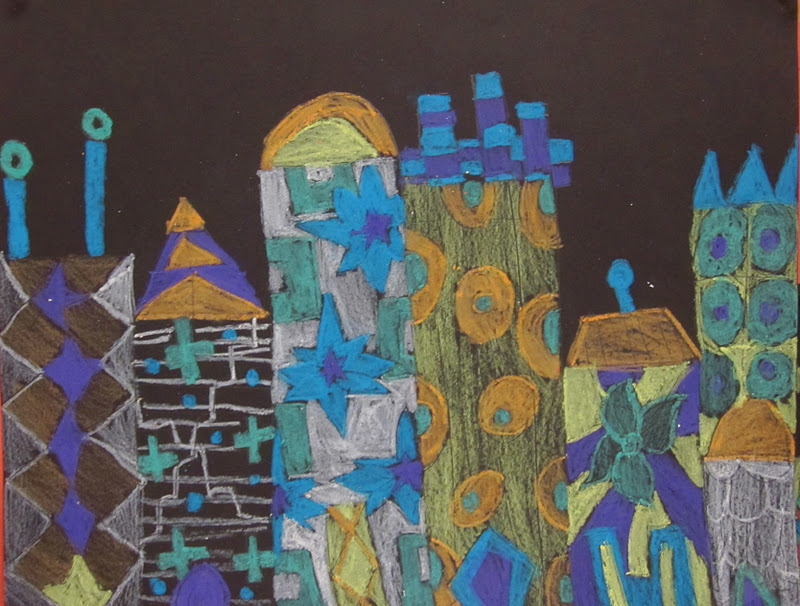 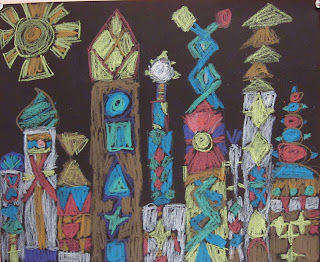 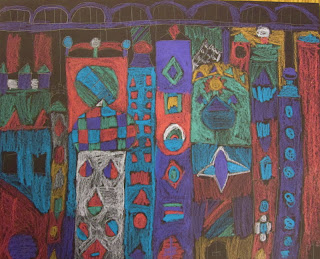