This week the 4th graders are doing robot propaganda posters inspired directly by a poster by Zachary Mallett. 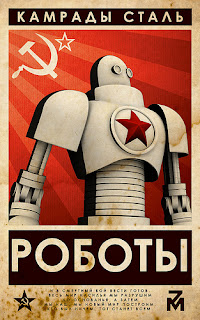 Zachary is a 3d lighting artist based up in Vancouver. He makes fictional characters and objects look more realistic by adding light and dark values to the flat base shapes they are made of. He also applies a similar use of light and dark to posters and designs that he creates. The latter works are more graphic and bold in nature.
The kids were pretty thrilled when they got to see some images of Zachary's from his website. They immediately picked up on his use of tints and shades to make things look more realistic. After sharing some of his work with the kids I also showed them some older propaganda posters so they could see examples of the format and style Zachary used in his robot design.
When the students found out that they were going to make their own robot designs, they got a little giddy to say the least:)
They planned out the basic composition first by cutting a black rectangle into a thin piece and a thick piece. They then chose a background square color and glued them all down to the yellow backing paper.
They drew out our robots next and added shadows to them based on an imaginary light source from the left or the right. Then cut out the bots. Some students added a symbol in the sky that related to their robot, but some decided that it was not necessary for their design. I suggested that if their robot was on the smaller side then they should add something to help fill up the background space.
Before gluing the robots onto the square, students added a pattern with one construction paper crayon that faded out as it moved from one side of the square to the other. Then the cut out could get glued down. I asked students to think about which direction they wanted their composition to go. Horizontal or vertical? Skinny black bar at the top or bottom?
Then it was time for them to add their slogan. A simple yet bold statement in the thick black rectangle. I had them write it out in pencil before going back and filling it in, so that they could space the type evenly and they could correct any misspellings.
So far so good, 4th graders. I'm looking forward to seeing more fantastic robots tomorrow! 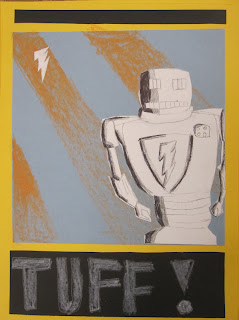 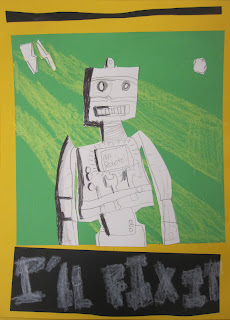 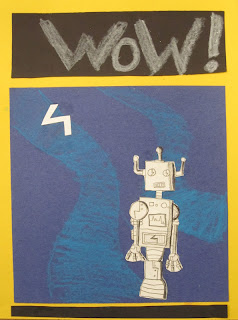 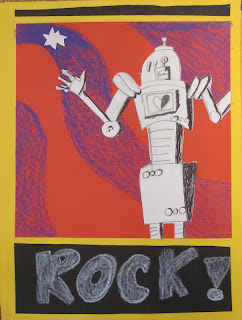 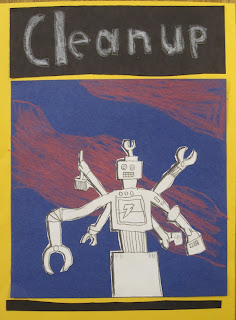