This is the lesson I did with the 3rd grade classes before the light motion project.

Heather Brown is a painter and printmaker who lives on the North Shore of Oahu. She loves being in, on, and around the water. These are the things she makes her art about. Her work reminds me of stained glass windows, with her use of bold, bright colors and thick contour lines. 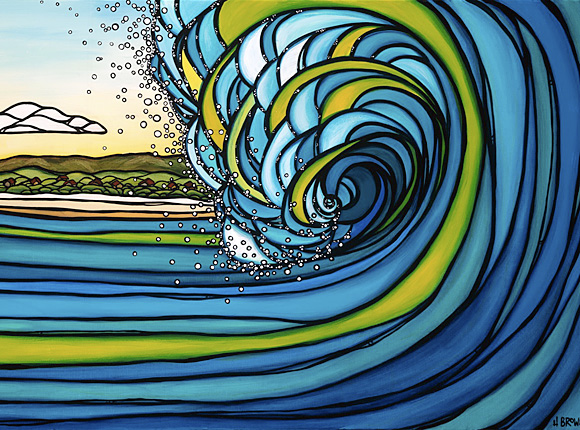 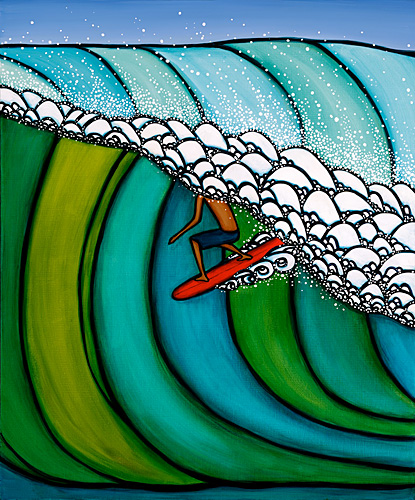 I shared a few of her paintings with the students. We revisited 3d space in art and how Heather creates in with size, overlapping, and color value changes. We then talked about how she creates movement in her work. All the kids agreed that the waves looked like they were moving and not standing still. I got a   lot of wave hand gestures and air spirals when kids were describing why Heather's waves looked like they were moving. That was great because she does create movement by simply using curved and wavy lines. She also does it by the position of the waves. They won't be staying in that position for more than a split second.

We also looked at Heather's color usage. She uses lighter colors and darker colors to give the waves some volume, as well as to give her scenes some 3d depth. The 3rd graders had created light and dark versions of colors in their first two projects, but they did it through changing hand pressure. Students in each class were able to tell me that in order to do it with tempera paint, they would have to use more or less water.

We drew out our waves together. I did several different seascapes with the classes. Most were based directly on Heather's paintings and a couple were different compositionally, but used her vocabulary of shape, line, and color. 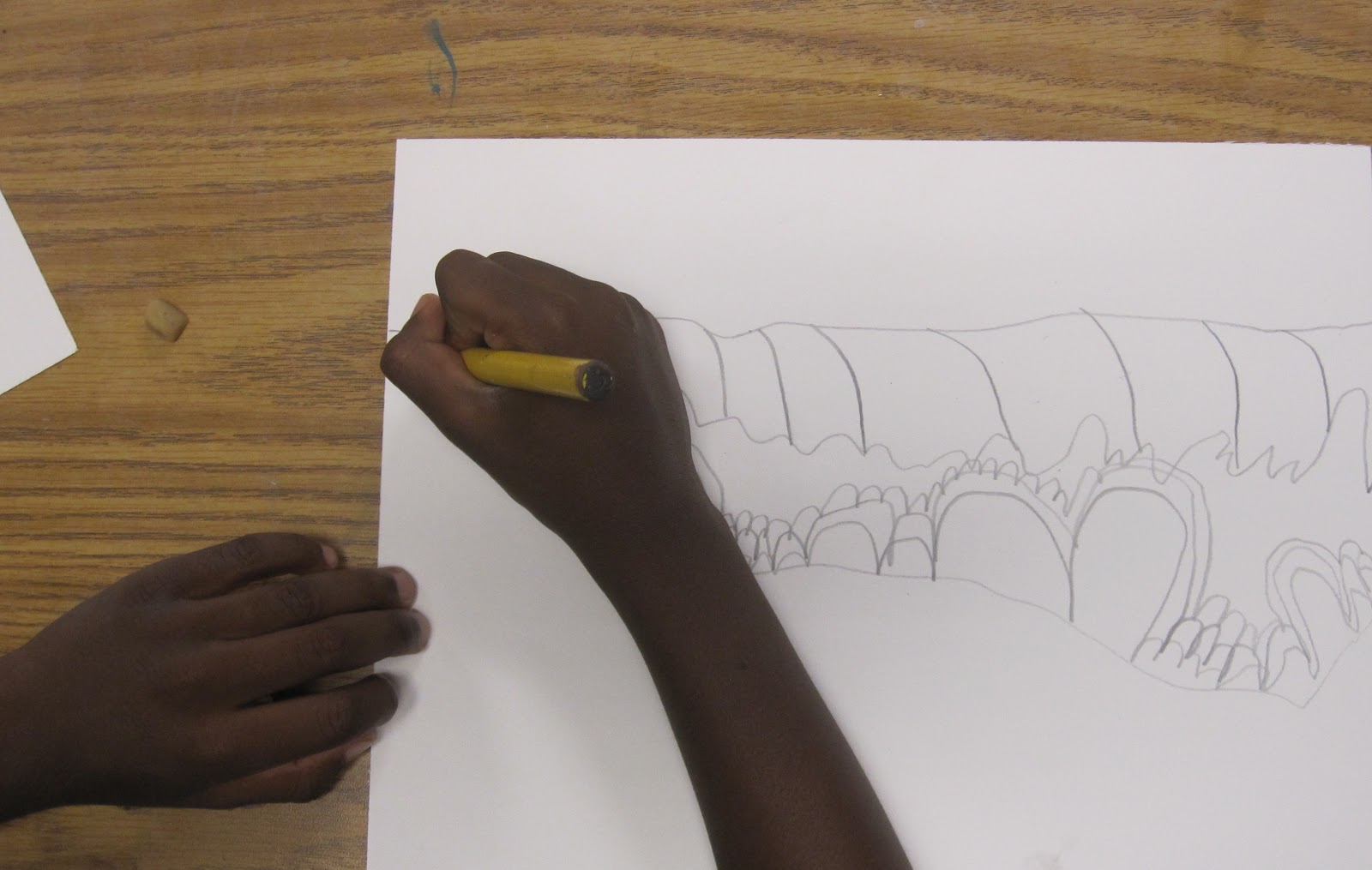 We traced most of the lines with a black crayon to help keep paint from bleeding from shape to shape. We used sharpie markers to trace the lines in the white foam parts because they were often smaller and more detailed than the other parts. 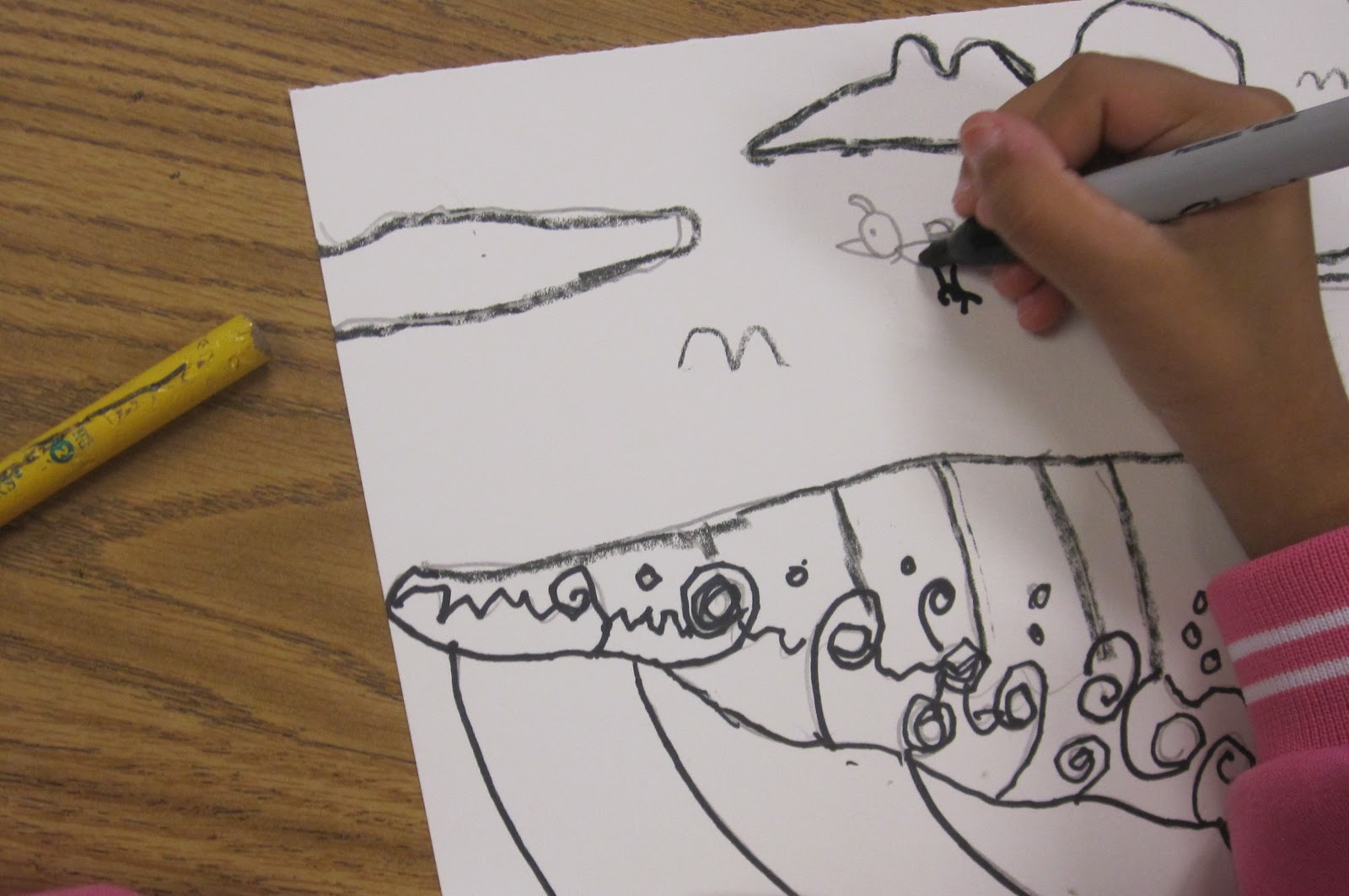 When it was time to paint the waves, I suggested using the analogous color family of yellow, green, and blue, with some violet thrown in too. They could use other colors on their surfers, skies, and islands. The main thing, no matter what color they used, was to mix light and dark values of those colors to create 3d volume and space in their paintings. 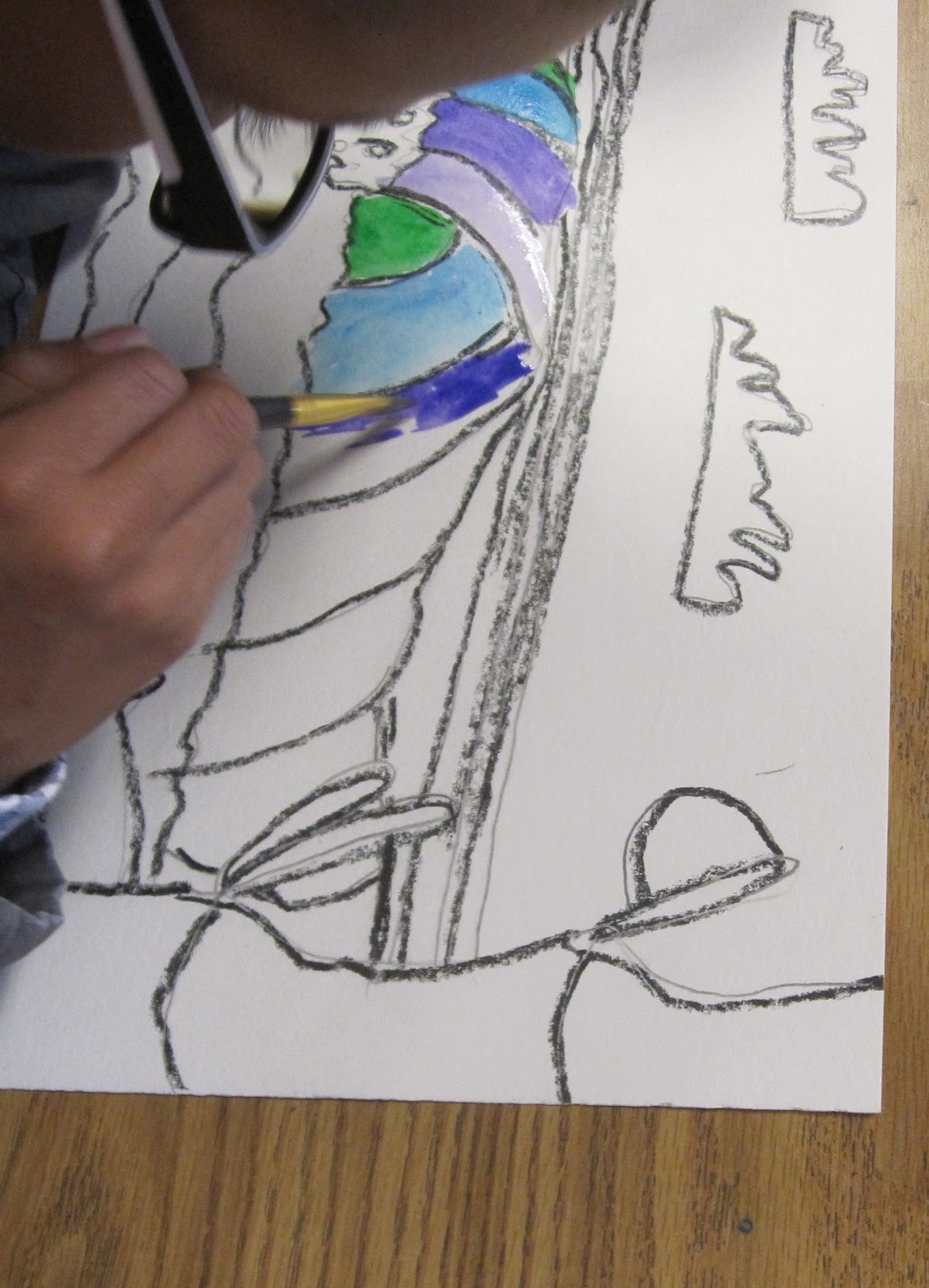 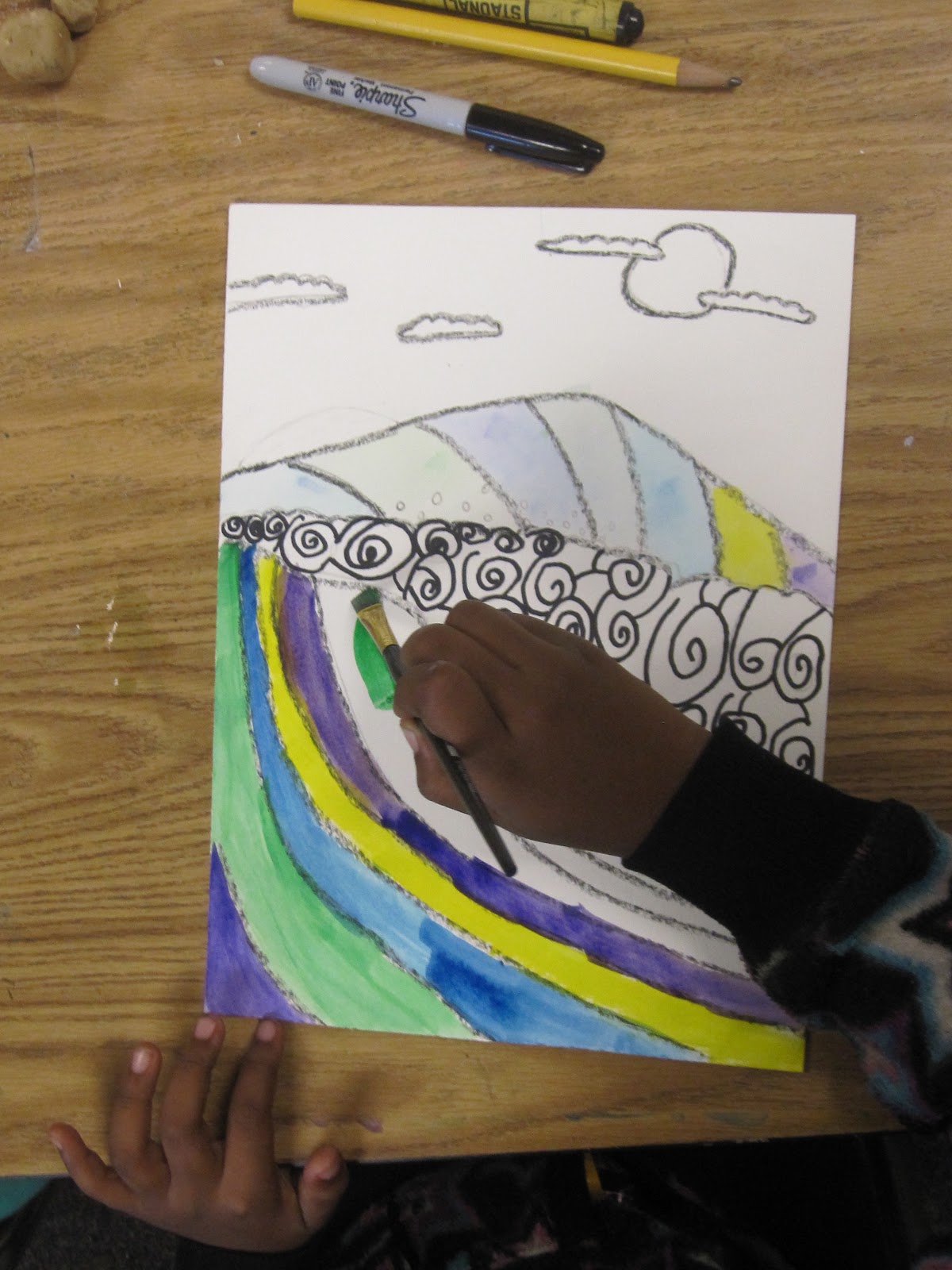 A few students finished their work by the end of our first meeting, many kids came in during recesses to get further along, and pretty much all the students were done painting after having 20 more minutes during our 2nd meeting.

I think so many of the results came out terrific. Stunning really.The students really enjoyed the project and Heather's work. It's something about the ocean and waves as the subject, I think. This is the 3rd project over the past couple years that I have done with waves and the students always have a high level of engagement. 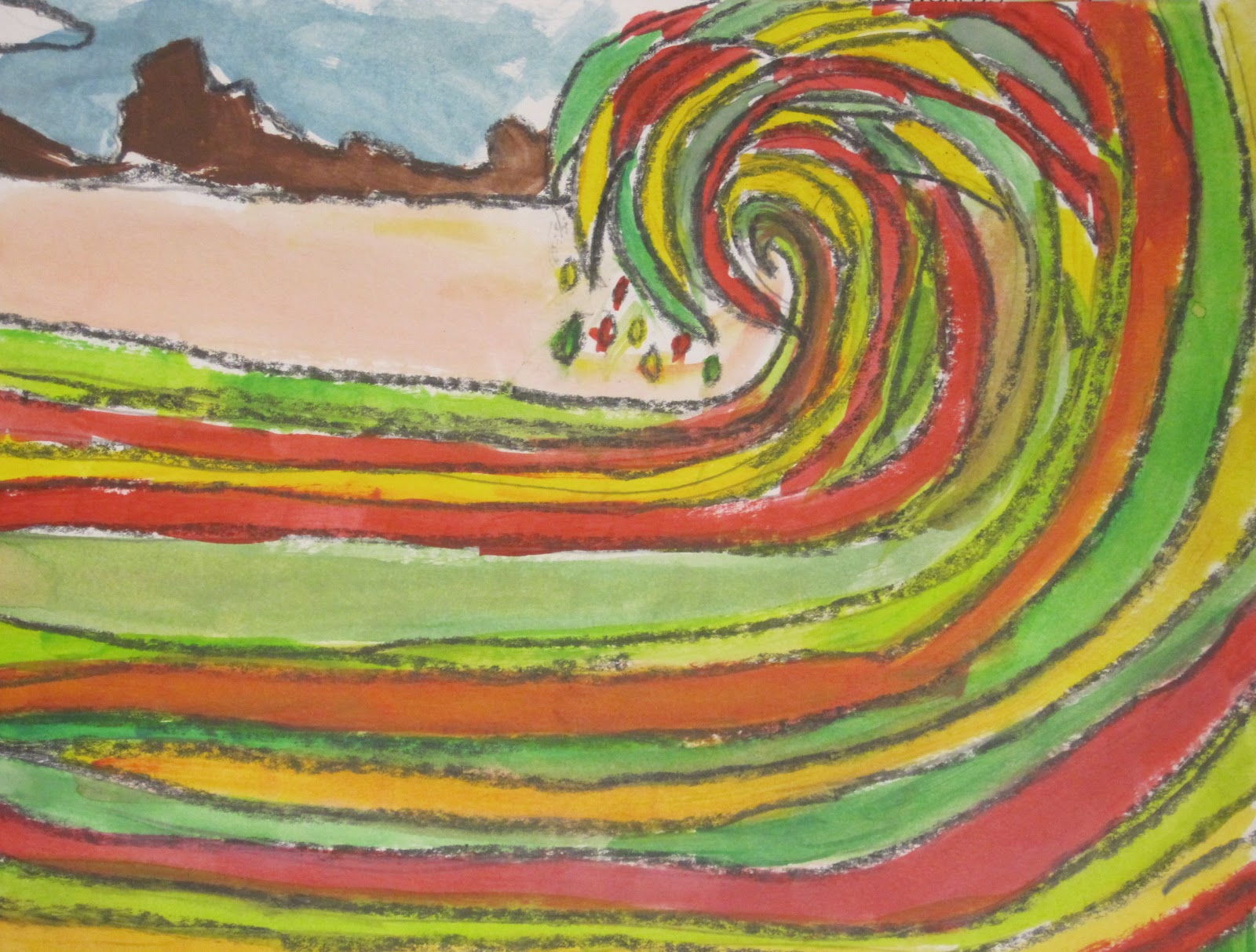 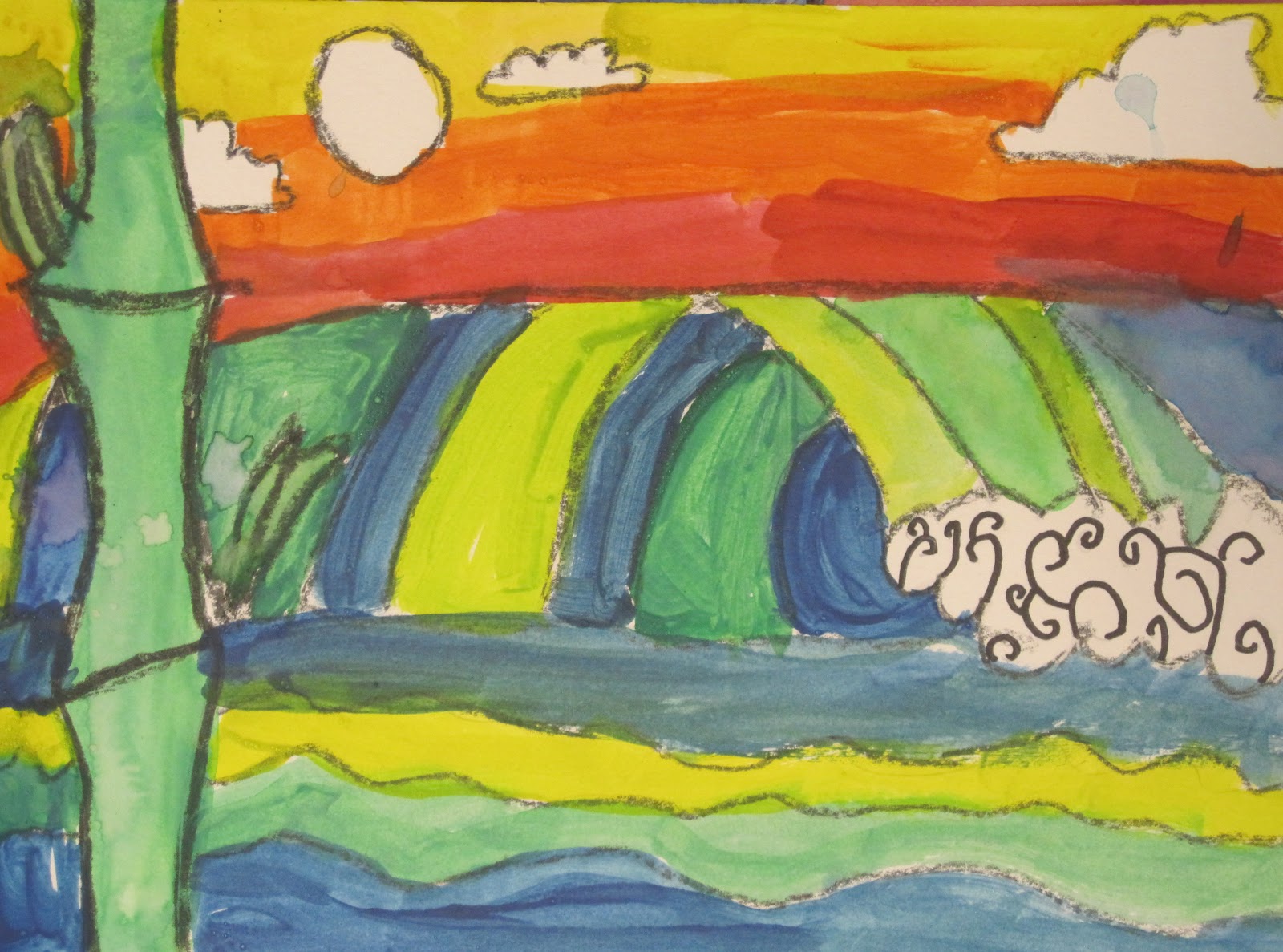 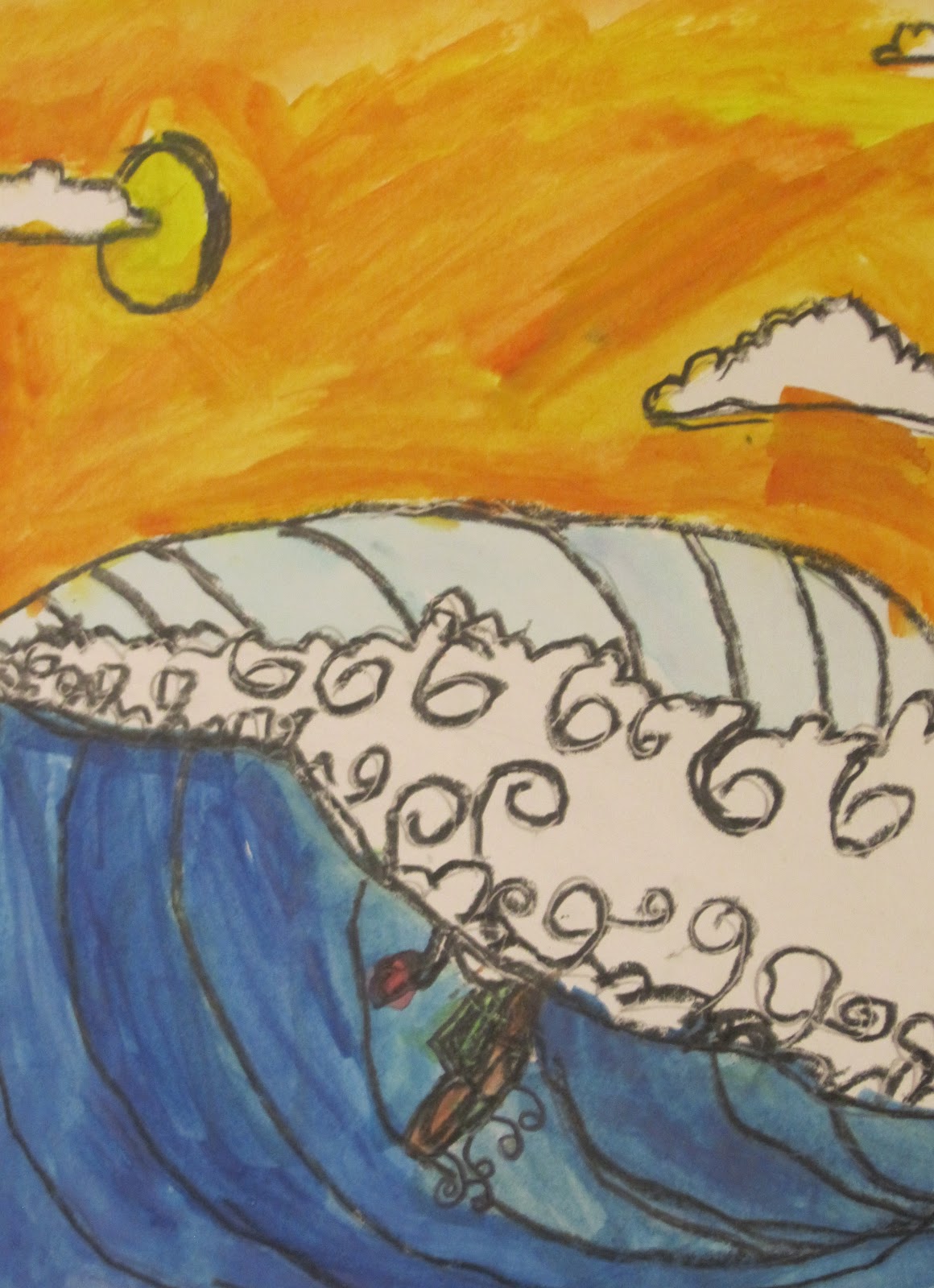 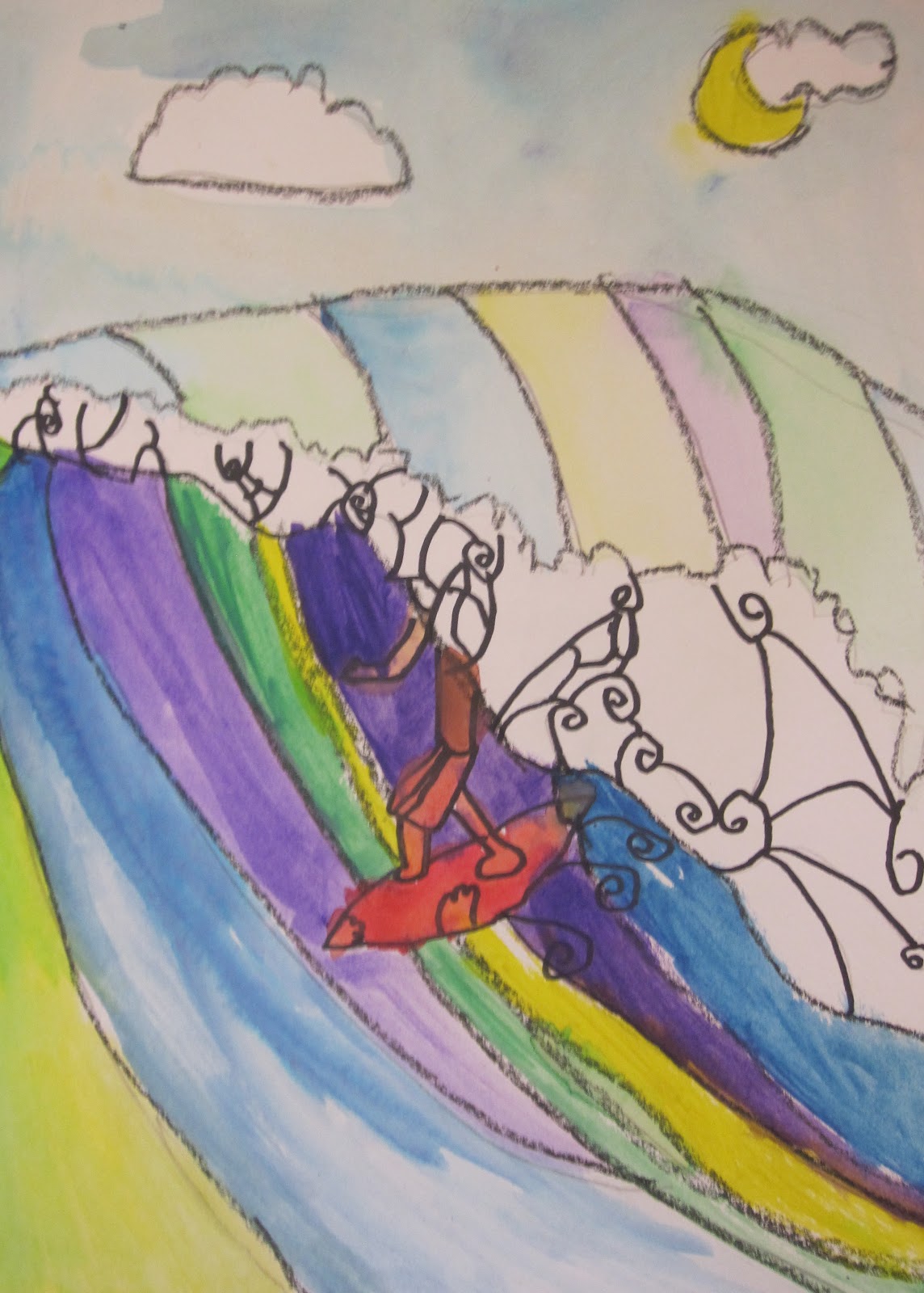 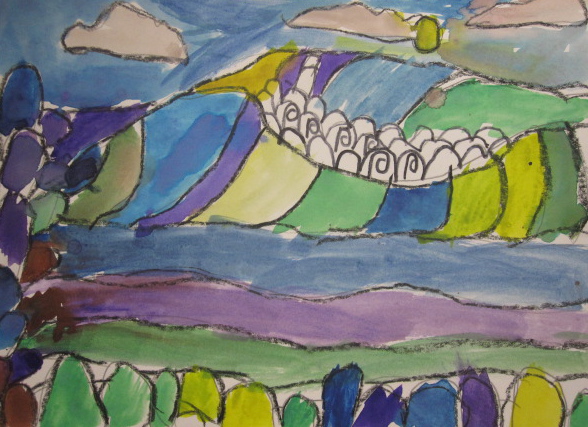 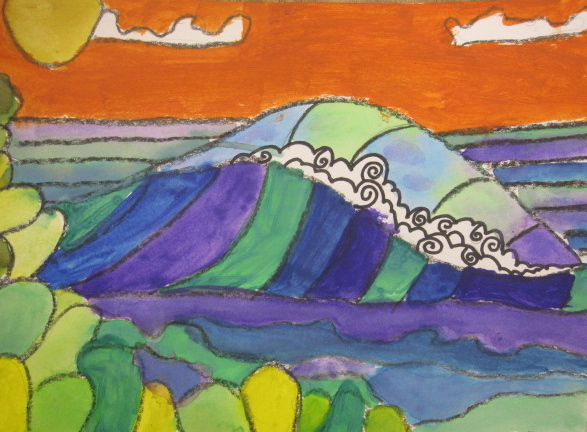 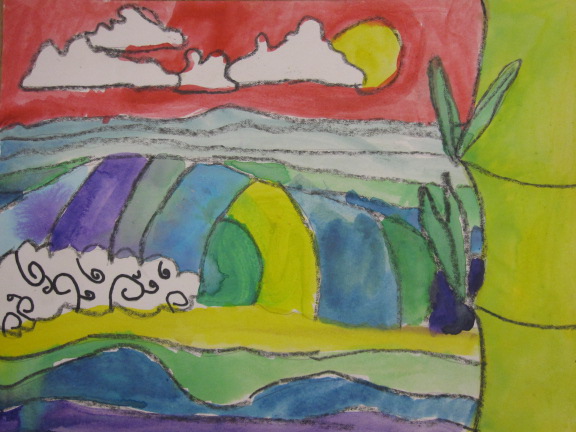 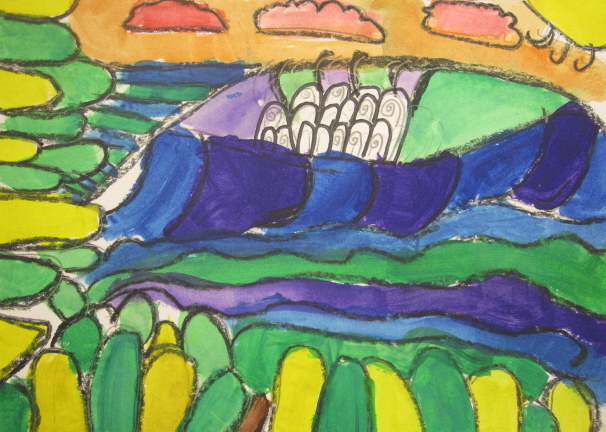 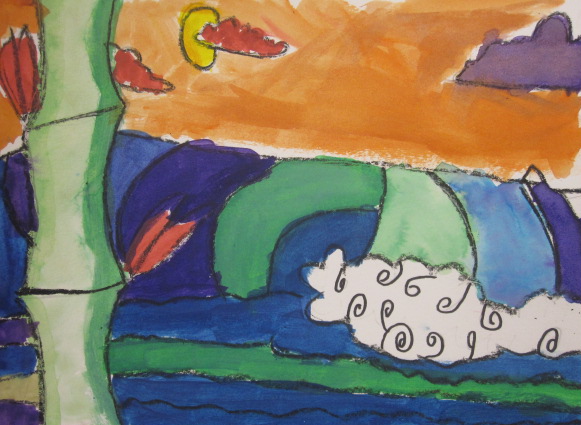 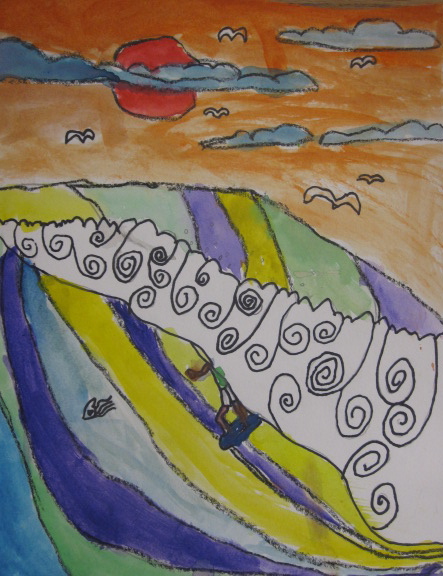 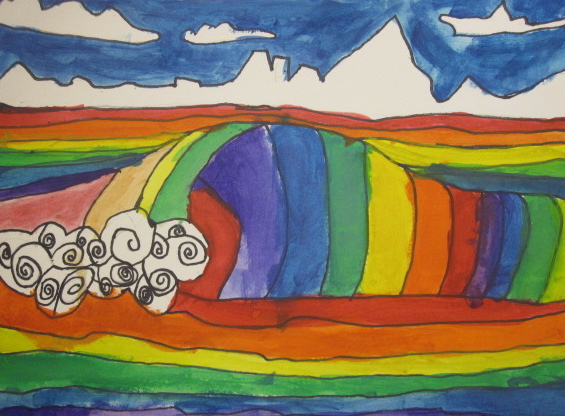 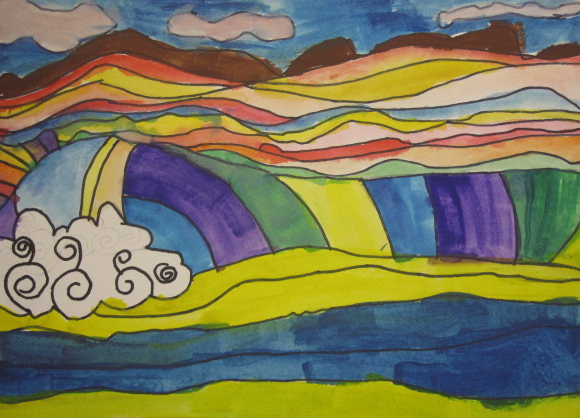 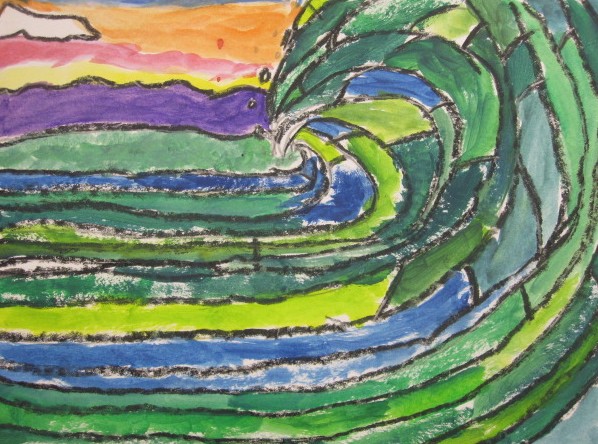