Well, I couldn't let the 5th graders have all the fun with skateboards this week, could I?

I found these fly designs by Samuel Murdoch online last week. Samuel was born, raised, and schooled in England, but now resides in Vietnam. He did a series of deck designs for the LB Skateshop. Each of the animals he chose is native to Vietnam/Asia. I loved the tie in to native animals. The designs, themselves, are super clean and bold. 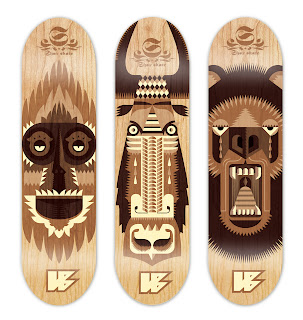 The added bonus is that the designs are a showcase for symmetry, which is what I am focusing on with the second graders this go around. Perfect:)

The classes did 3d symmetrical paper snowflakes last week, so I revisited the concept of symmetry with them when they arrived. I also did the same thing with using collage to make art. I told them we would be revisiting both things this lesson, but the end result would look a lot different than what they made last week.

Before starting the hands on activity, I told the class that we would not focus on an animal native to Vietnam, but one that was native to California. I also told them this animal was on the state flag. Yes, we would be using the grizzly bear as our focus.

1. we shaped the board
2. we folded and cut the head shape
3. we folded and cut the face shape
4. we glued both parts on to the paper decks
5. we then used leftover cuttings of the dark paper to use for locating the eyes
6. we folded, cut, and glued the mouth and nostrils
7. we folded, cut and glued the teeth and eyes
8. we added symmetrical designs to the top and bottom spaces of the deck, using leftover paper and colorsticks
9. we cleaned up
10. we let out a big growl!

I'd say the teeth were the hardest part for most of the classes. The small zigzag cuts were a bit tricky for them. Even though everybody followed the same steps, there were many interesting variations of bears and background designs. When students were adding background elements I emphasized that would be how their designs would look a lot different than their classmates'. 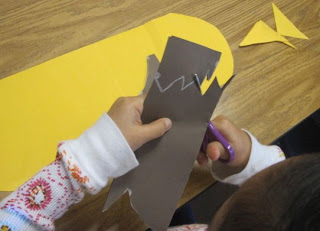 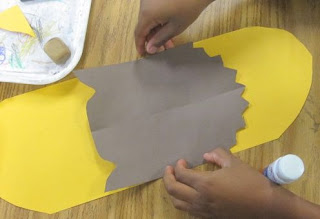 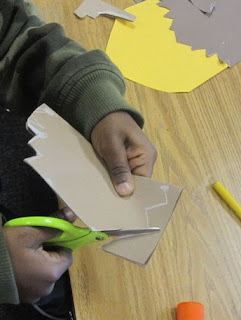 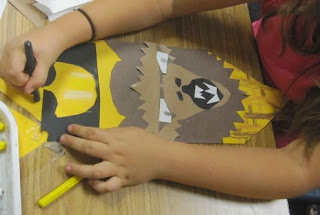 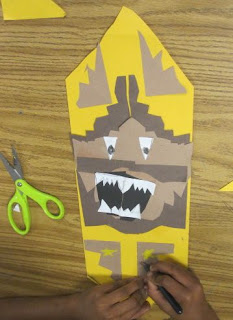 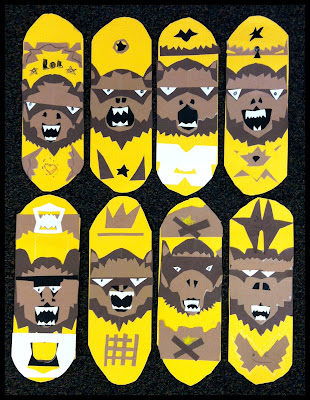