Last week the kinders did a project that included a body of water, so I thought doing a project with fish or other sea creatures would be a good followup.

I recently discovered the work of Baba Wague Diakite. He is an artist that explores stories in a variety of mediums. Baba  writes and illustrates children's books, makes paintings, makes clay vessels, and plays music.

Many of his images include wild animals. He also explores pattern often in his work. Baba includes the patterning that is present on the creatures and he uses it as a decorative element in backgrounds or borders that tie in with the main characters in his wide variety of images.

After revisiting the project done last week with my classes, we took a look at Baba's website and learned that he was born in the country of Mali in 1961. He and his family now split time between there and Portland, Oregon. We looked at a number of his pieces and identified different animals and patterns in them.

We also talked about the fact that many of his paintings are done on clay bowls, plates, and platters. Students told me what we use those things for and we talked briefly about how those pieces are different than a drawing or painting on paper because the clay pieces can be used as well as looked at. 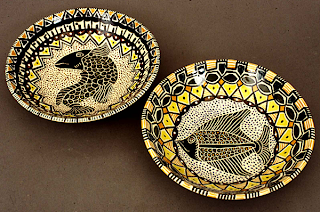 The last pieces we looked at of Baba's were a couple fish plates he made. We talked about the connection between the last project and this one. Drumroll.... the fish live in the water! Plus, the fish scale pattern we used in this project was identical to the wave pattern we used for the water in the previous project. The students created their own pattern infused paper plates based on the subjects of these plates.

1. I predrew the large circle shape for their paper plates
2. students drew inner circle to define a border in their design
3. students drew a sea creature that included repeated shapes or lines
4. students added a pattern in the border that related to the center image. I had some drawings of things they could use- boats, hooks, waves, bubbles
5. students traced their pencil lines with a black crayon to reinforce the lines even after painting
6. students cut out the plate shape from a square sheet of paper
7. students used watercolors to paint their plates- I emphasized the use of more water to make their colors lighter, so important shape and pattern details would not be lost 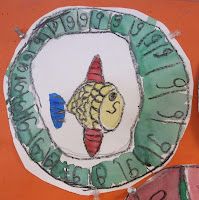 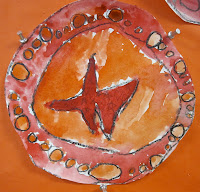 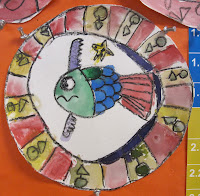 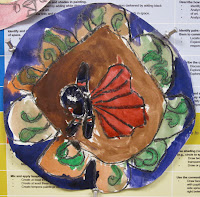 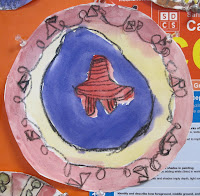 There were some interesting combinations of creature and pattern in the 4 classes that did the project. I think in the future I may have them use water soluble markers to paint with because there were too many students that went too dark with their paint and the hard work they put into their designs were lost.
Posted by dmasse at 2:33 PM