The second lesson the 2nd graders did again focused on their use of contour line to define shapes. Since we are only a couple weeks from Halloween (how has THAT possible already?) I thought it would be fun to do a project based on an illustration by Dinara Mirtalipova.

After sharing what Dinara had written about herself on her website and looking at the accompanying photo/drawing of her, the students came to the conclusion that Dinara is a little bit silly:) We looked at several of her illustrations and identified her use of contour lines and patterns. The Jennifer Mercede project from last week had addressed both of these concepts. The students got a big kick out of her crocodile image and her bird on top of a monkey on top of an elephant design.

We also looked at how some shapes in her illustrations covered up parts of other ones. She used overlapping to create some 3d space in her work.

The image that was our focus is called 'My Inner Monster". I only showed the monster shadow part first. After the kids shared what could be making such a shadow I scrolled down further so they could see the little kitty. 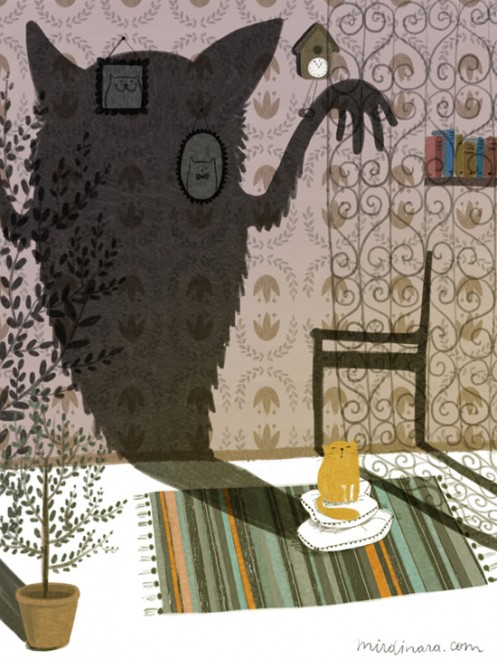 The students were very excited to be doing a drawing based on this. I stressed that we would be building some of the drawing together, but that the design of the monster shadow was up to them. This got a bunch of hoorays in each class.

We identified some overlapping parts, patterns, and a few contour lines. A number of students also pointed out that the shadow did NOT have a contour line around it. Awesome.

We drew out the cat, pillow, rug, and floor line together. I modeled how to make some picture frames, clocks, book shelves and open doors and let the students add what they wanted to their interior setting.

When we did the rug I stressed the importance of using diagonals for the sides, so that the rug looked like it was laying down and not standing up like a fence. I decided to add the door element to again address depth with diagonal lines. Many kids included this feature. Did the door lead outside? to a dark or light room?

Students traced a few of the parts in the front to make them stand out a bit more and then added color to the different parts of the drawing. Just like the giraffe picture last week, students were asked to create light and dark areas by pressing soft or hard with their crayons.

The monster shadow was the last element we put in. I emphasized that it was important to attach the shadow to the cat and/or pillow. We all did that step together. What they drew on the wall was up to them. The only thing I pointed out was that they could only show an open mouth if the shadow was in profile. If their monster was facing us then we would not see it's mouth in it's shadow.

They colored the shadow in softly so that elements that got covered by it were not totally lost in the final drawing.

The second graders had a lot of fun with this project and they are off to a great start in art this year:) 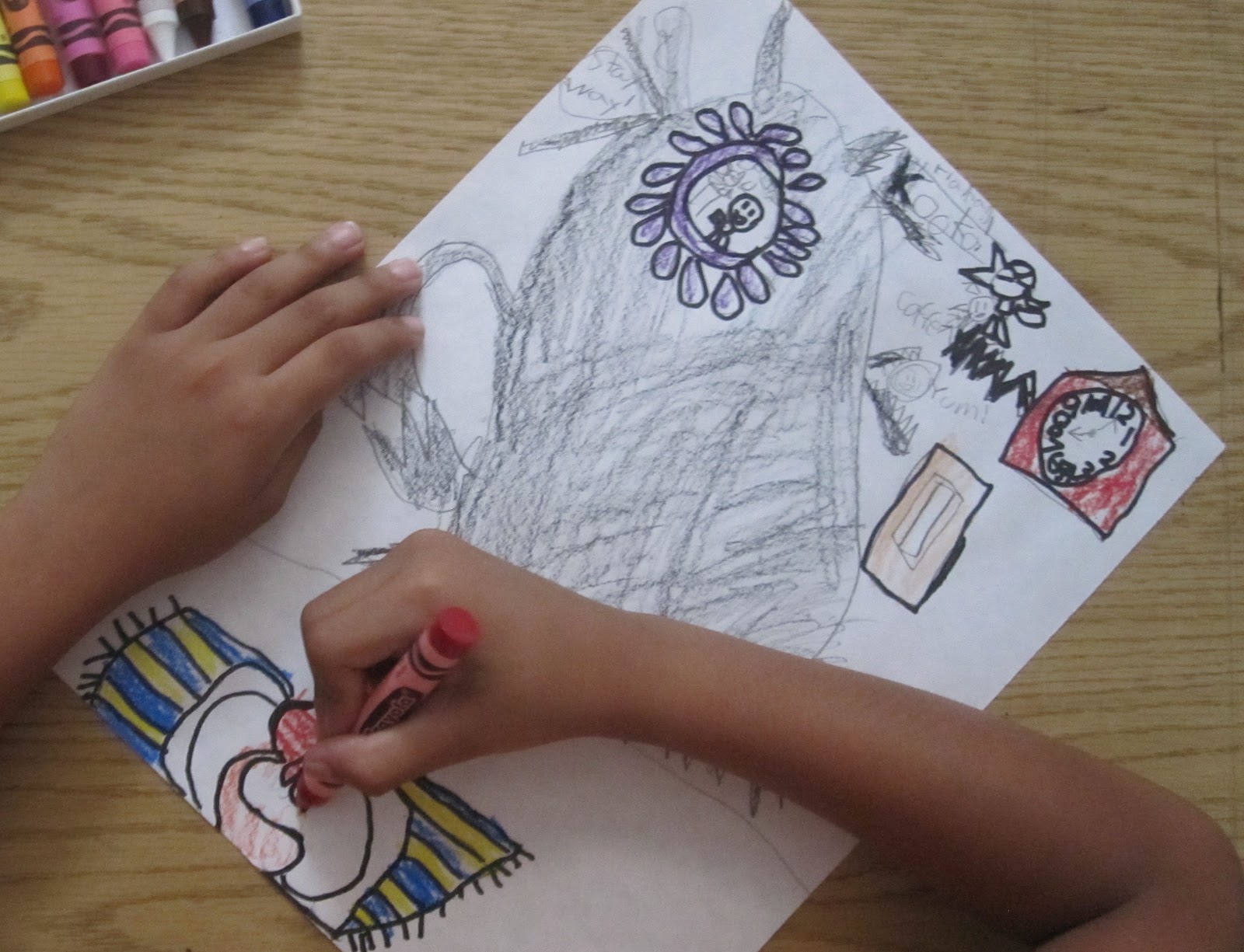 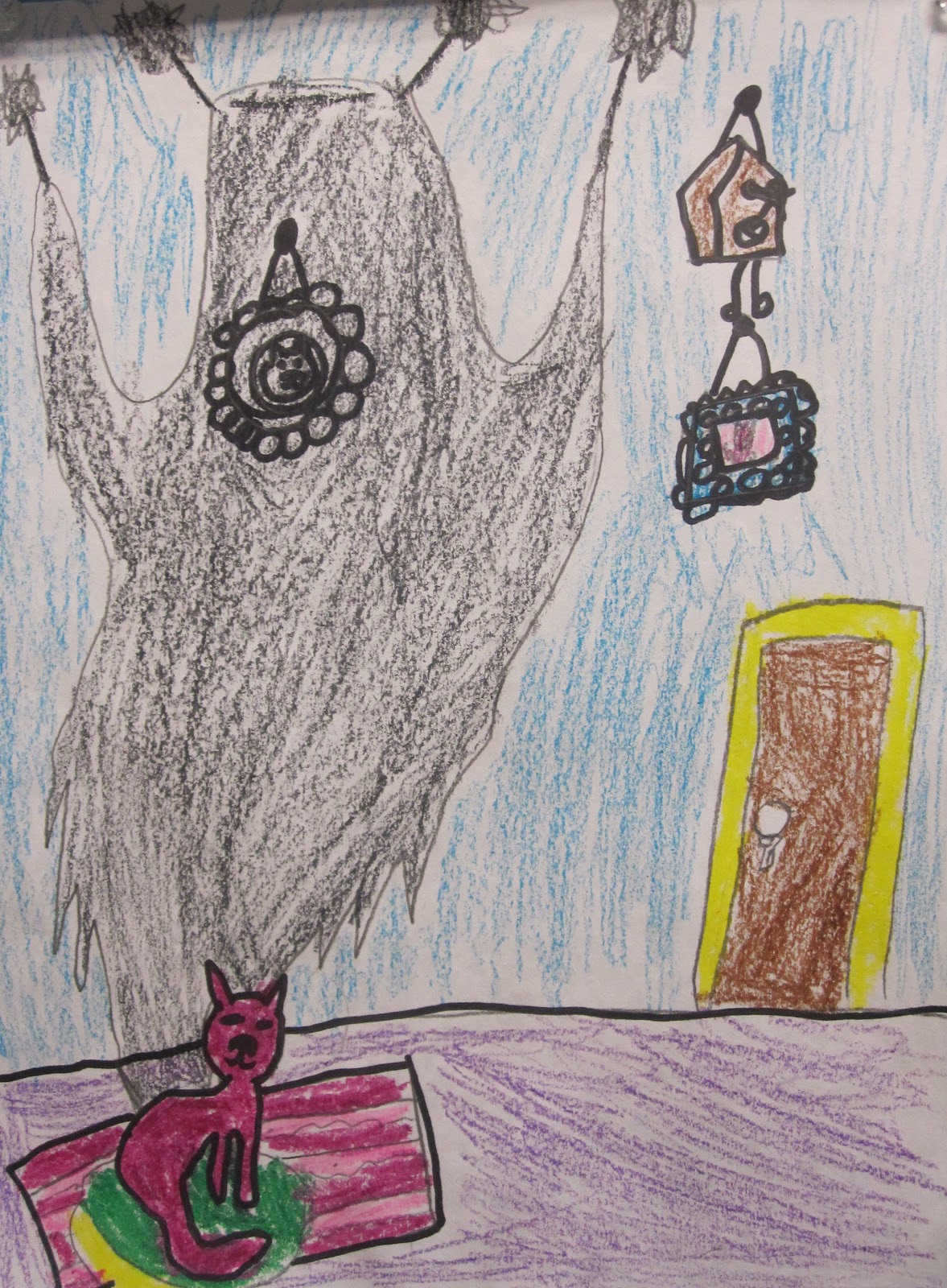 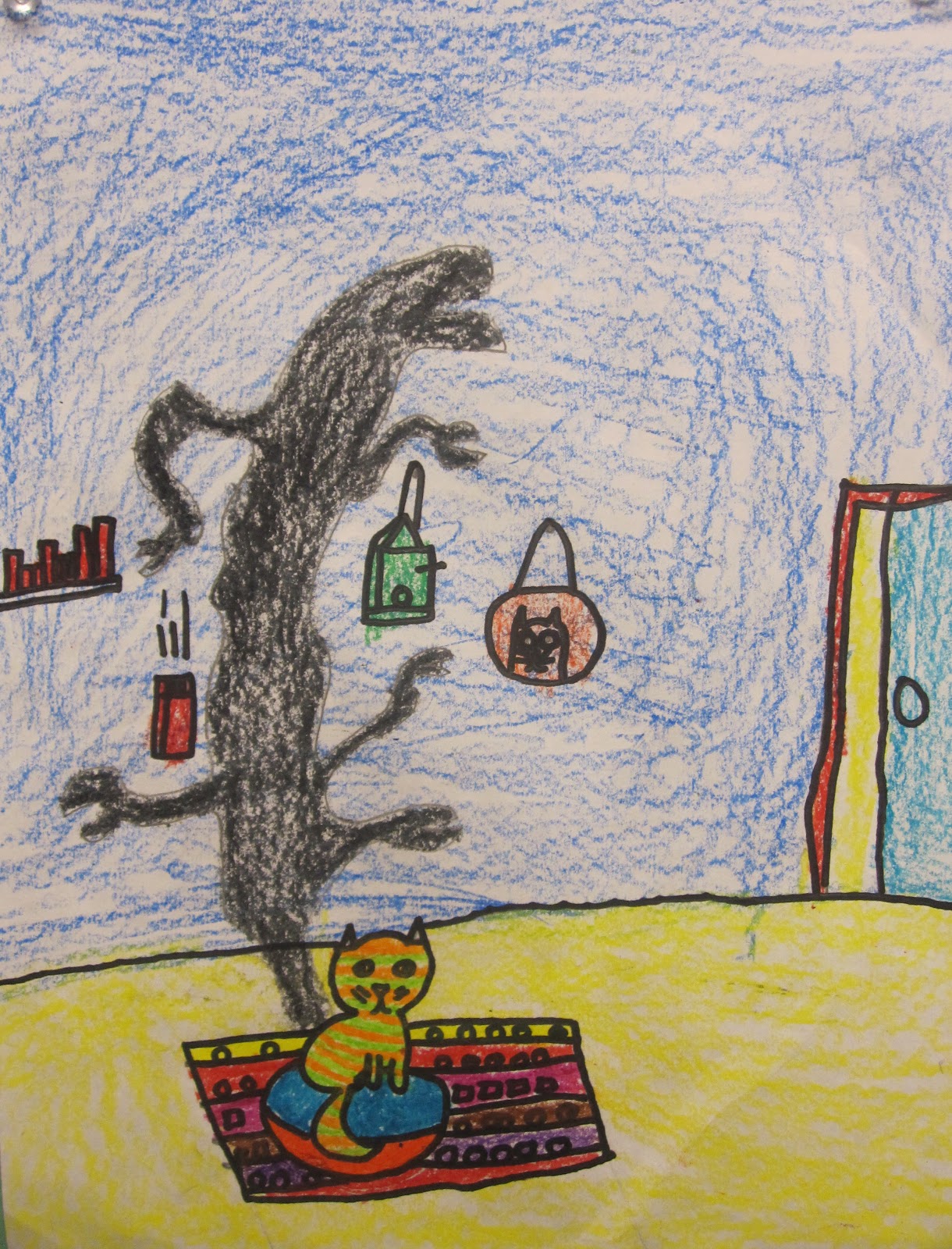 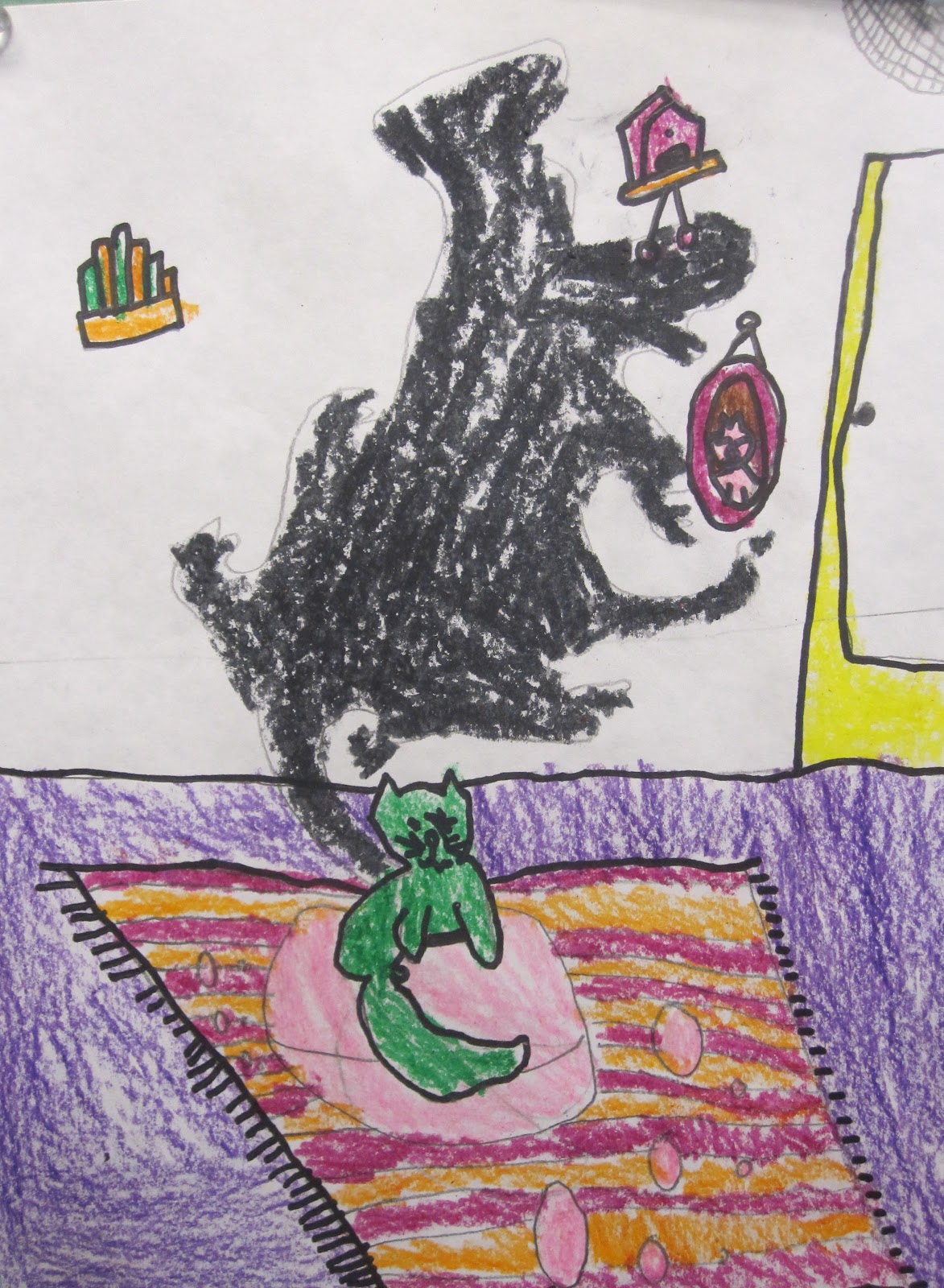 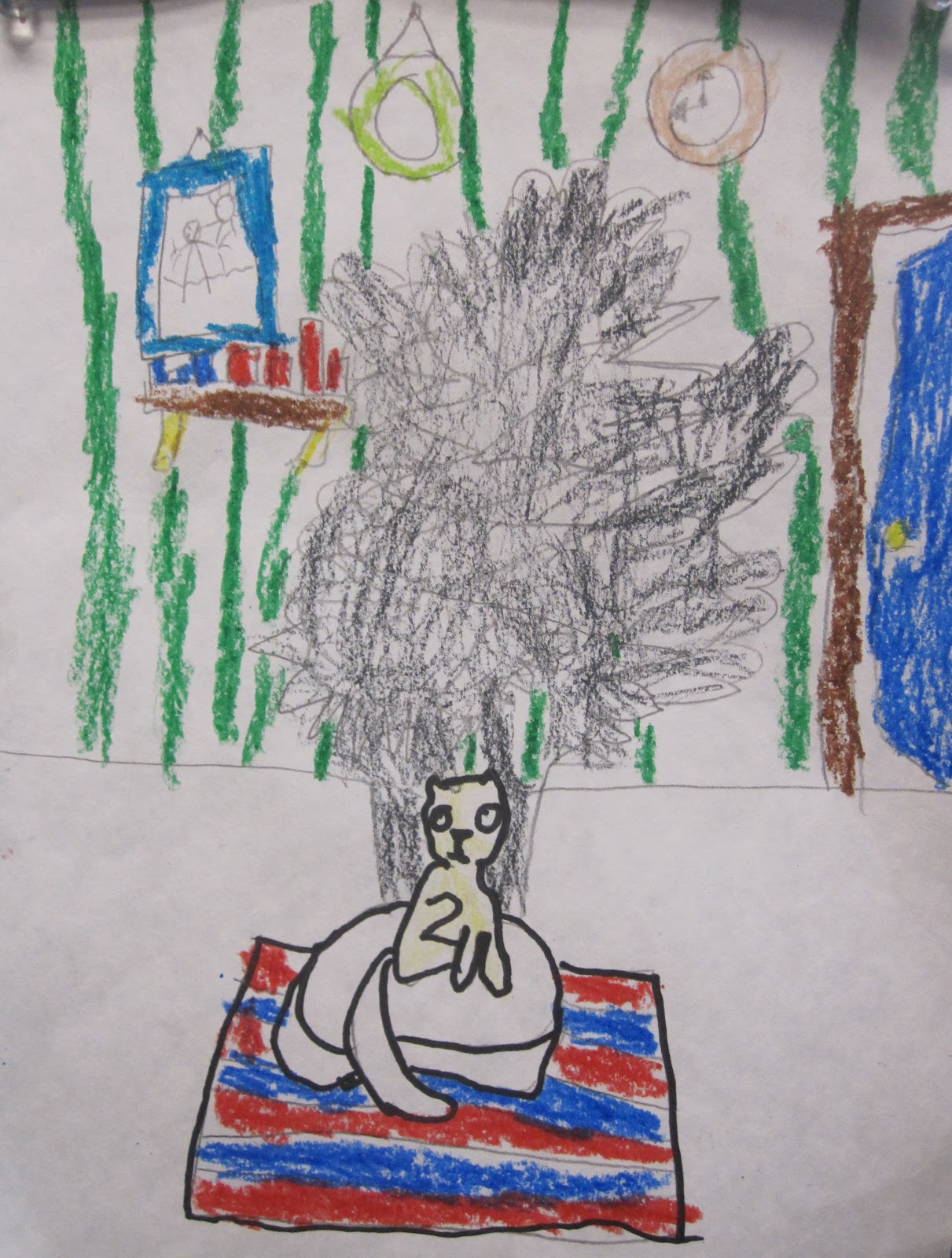 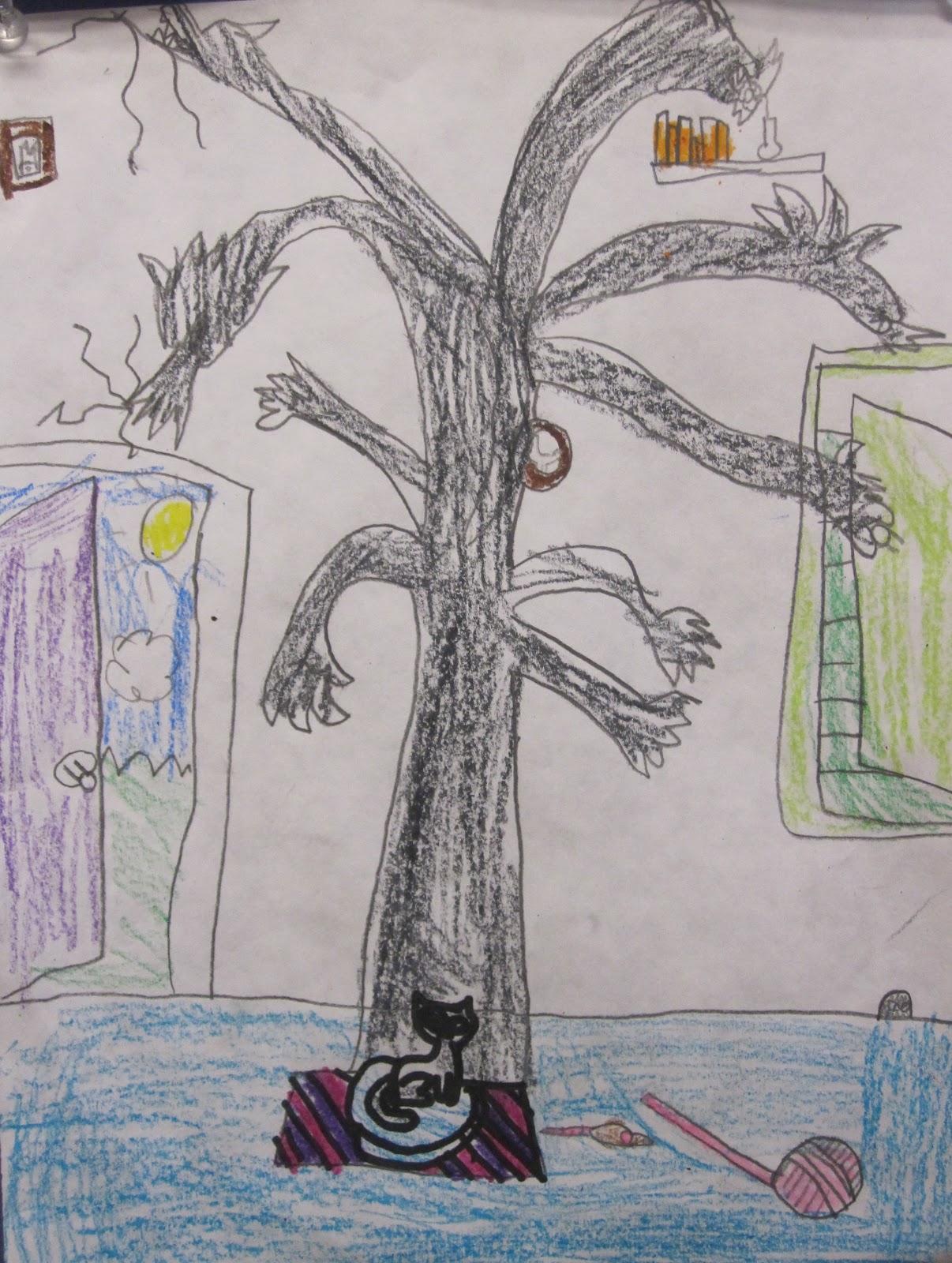 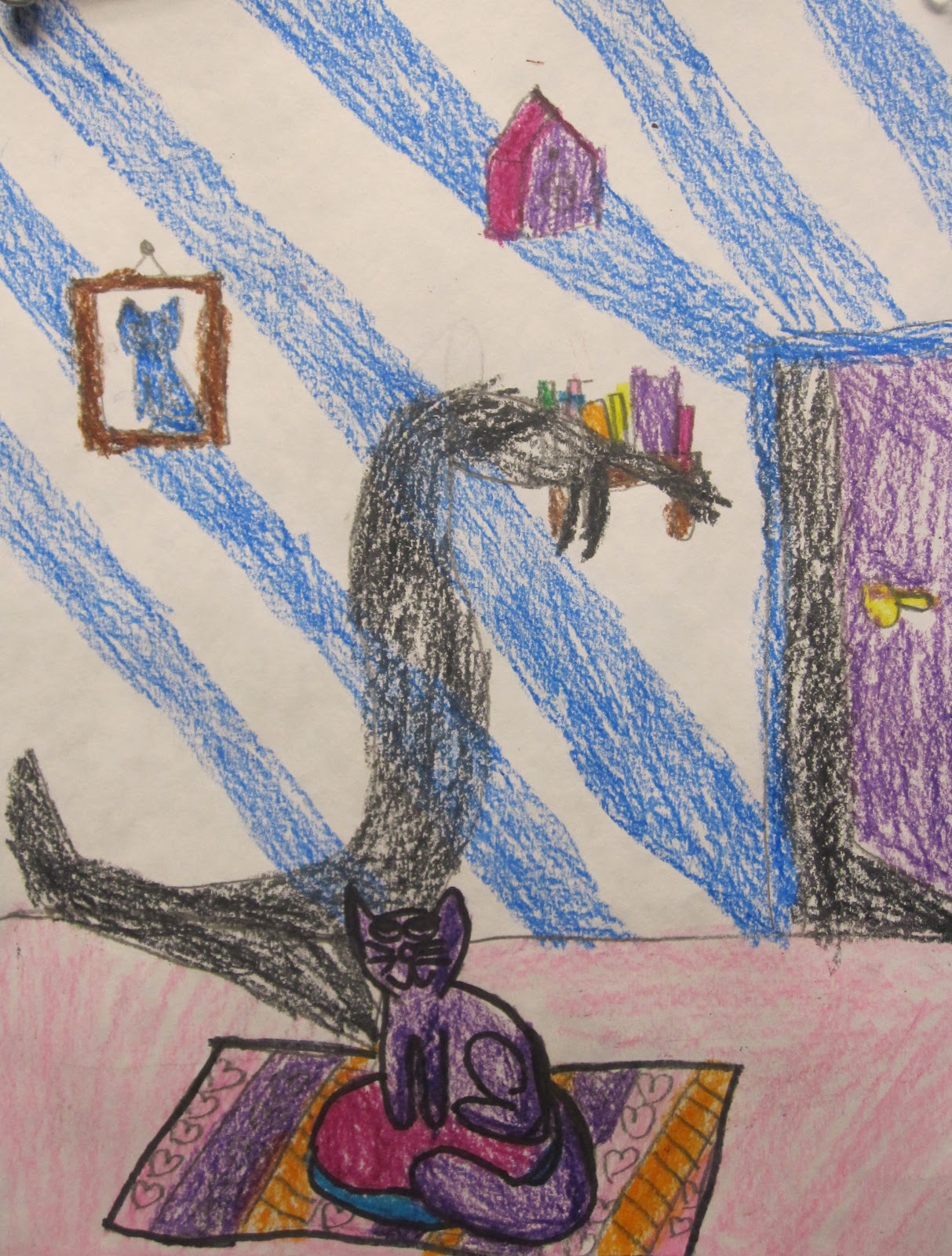 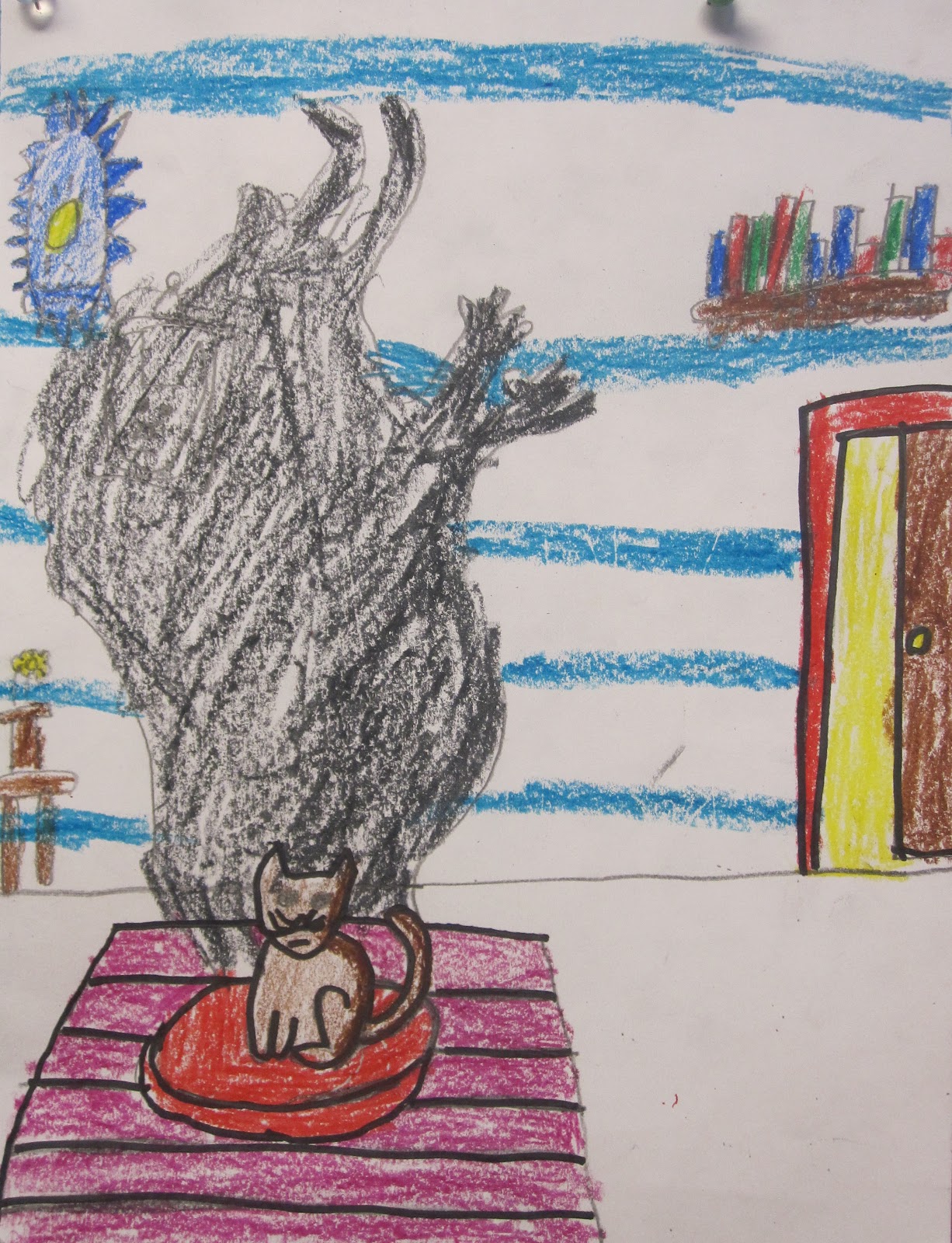 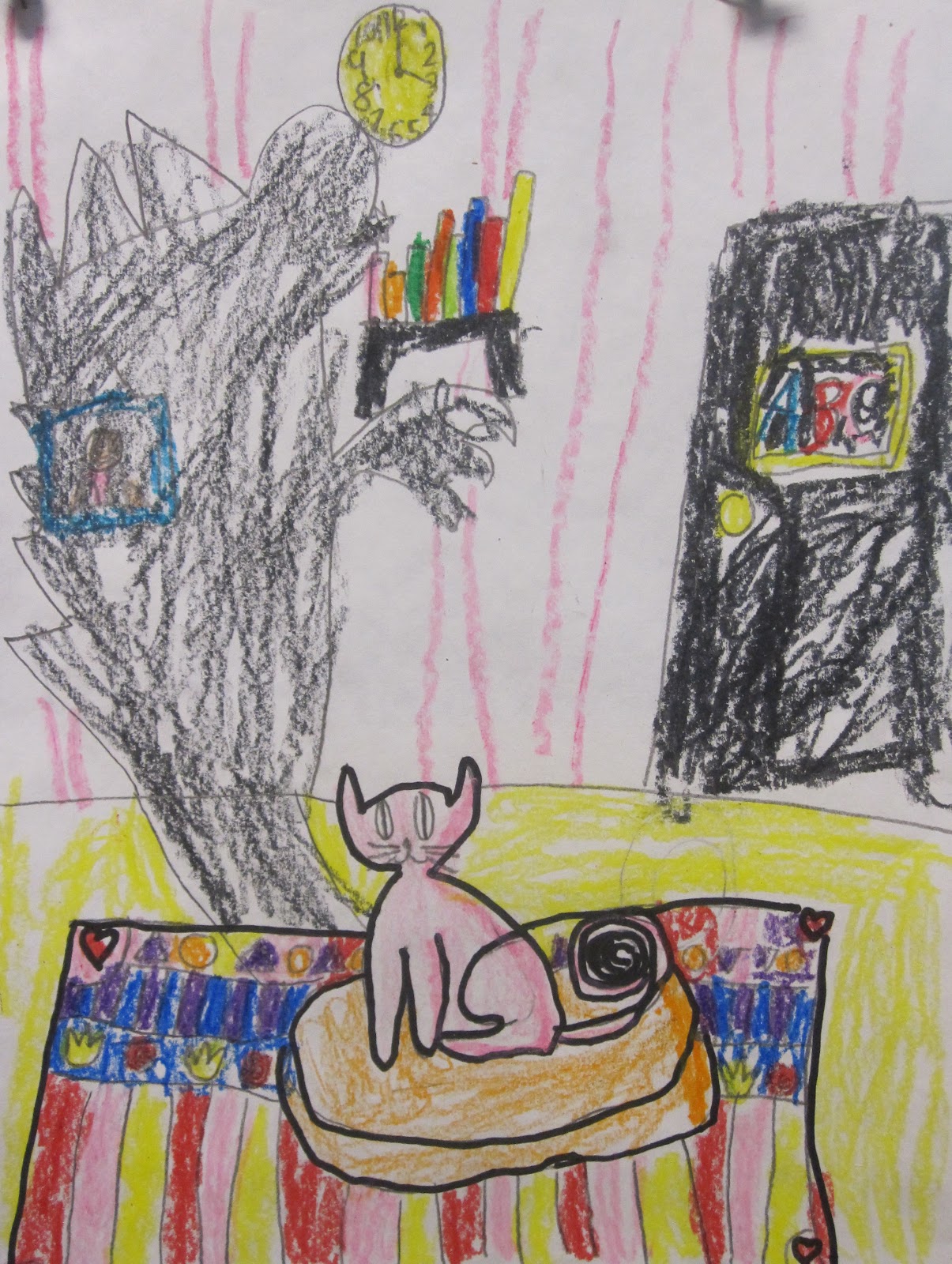 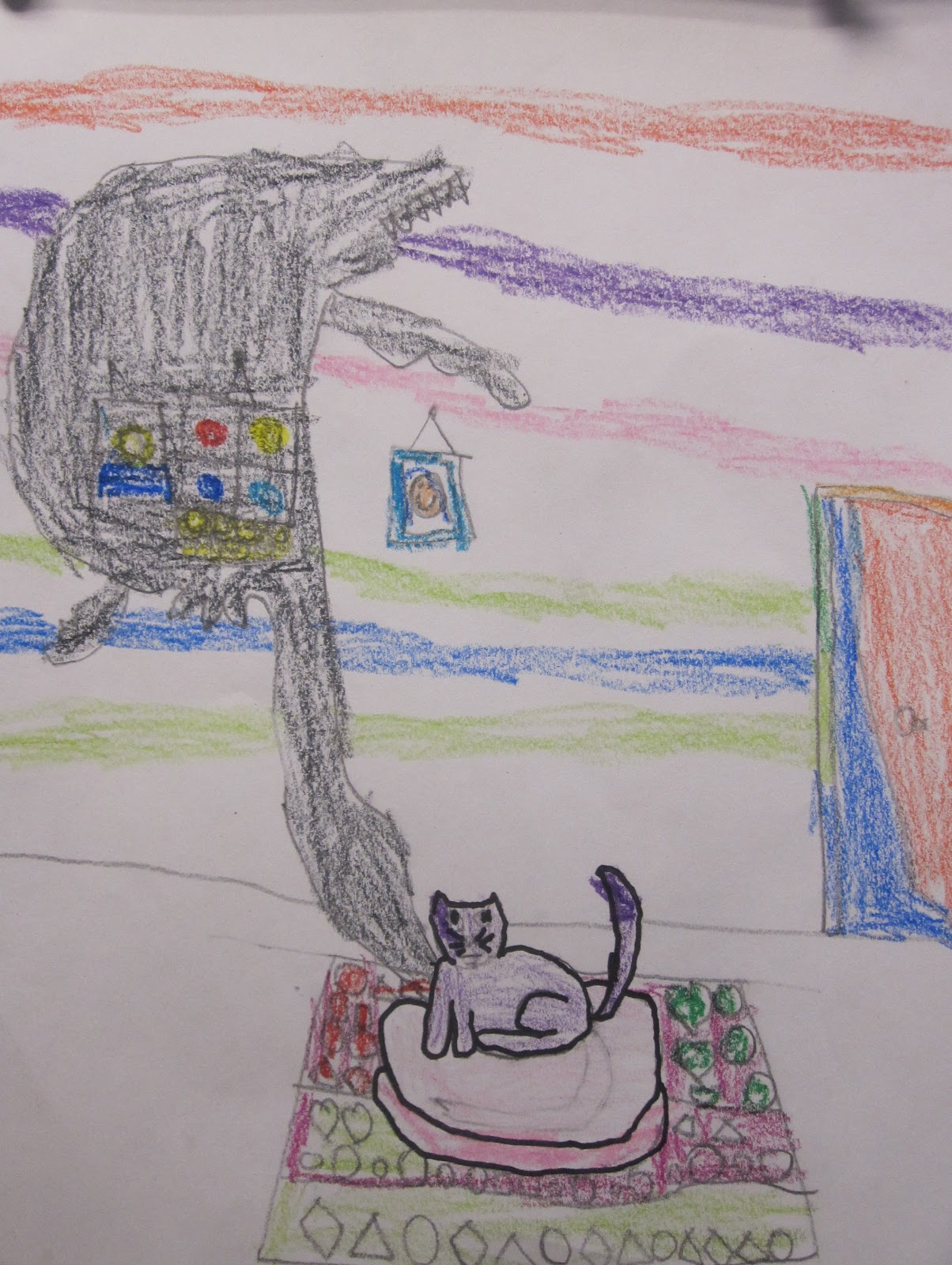