Popsicles and painting anyone?

There is a store in San Diego called Viva Pops. The owner, Lisa Altmann, makes the most delicious popsicles my family has ever tasted. We have been there a couple of times and the organic flavors she combines in her pops are just delightful.

In her store is a fantastic mural by local muralist, Isaias Crow and his collaborative team called  the Prizm Process. The painting takes up the entire length of the west interior wall of the store. It's as much a visual delight as Lisa's pops are a tasteful one.

The last time we visited, Lisa was kind enough to give me contact information for Isaias. I knew that I HAD TO do a project based on the mural with some of our students. We have been in touch several times, and it is my hope that we can have him visit Zamorano in the near future.

I showed the 4th grade students a number of murals Isaias has completed and they were blown away by the scale, the color, and the style of the works. 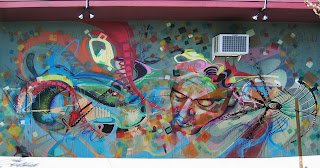 Isaias and his team use mostly spray paint and some acrylic paint to complete their large scale murals.

I then showed a few photos of the Viva Pops mural, both in process and complete. When I said we would be making a popsicle work there were roars. When I mentioned that we would use spray paint to add a finishing touch, mouths dropped. 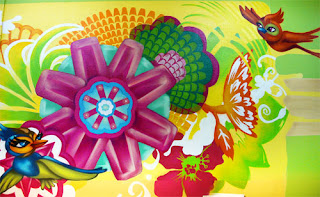 Before jumping in, I also talked about Isaias's use of natural shapes in his work. This was a good contrast to the geometric shapes students used in the Dalek designs. We also identified that the popsicle flower looked more 3d than other parts of the mural because of the use of tints of colors to create areas of light and shadow. The students had used tints in their previous Dalek designs to add variety to their image, but not a 3 dimensional element. We also looked at the rotational symmetry present in the popsicle flower.
Instead of using complementary colors in this project I pointed out that we would use a color family, or an analogous color scheme, to start out with. The students would be able to add other colors later on in their images, but the large pop and flowers would be in a selected analogous color scheme.
The project was broken into to sessions. In the first, student made the large pop and flowers by using collage, cutting and gluing paper.
The second session involved adding pattern and decoration to the 2 flowers on the pop, creating the popsicle flower, and adding a spray paint pattern element at the end.
1. cut drippy popsicle bottom and glue to large base sheet
2. use a brown construction paper crayon to add one or two popsicle sticks
3. cut 2 or 3 slightly different size or shape flowers and add to large pop
4. add patterns to flowers using construction paper crayons
5. draw out pop flower, add color with crayons, pressing lightly to make tints
6. cut out pop flower and glue to big pop
7. cut wax paper stencil to add spray paint pattern element
8. spray paint pattern on to large pop
The spray painting was done outside. Students placed pattern on their image and blocked out areas that they did not want painted. I did the spraying to facilitate consistency. The students loved seeing the gold on their projects.
There could be class management issues wit this last step, since some students are outside, in line, or inside finishing up, but I was very pleased with how all the classes monitored themselves in the classroom. I think my classroom was the cleanest they have left it all year, and we used a lot of different supplies that needed to get picked up and re-sorted. 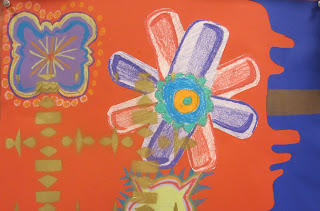 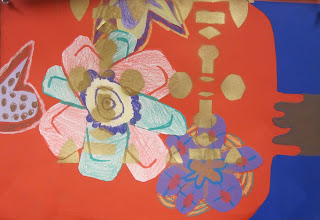 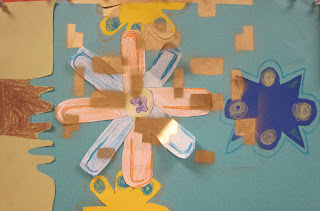 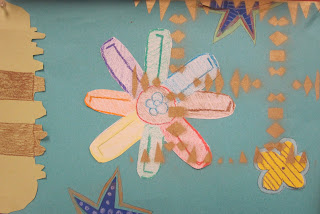 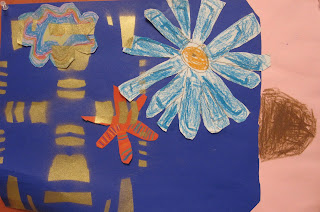 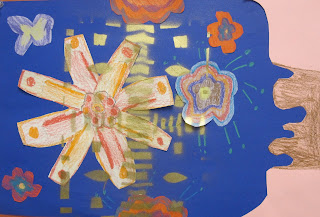