This week is the first time I have seen my 2nd graders in 8 weeks. I decided on using illustrator Nate Williams as the inspiration for these classes. Nate does work that has a humorous childlike feel about it. He uses a lot of hand drawn type and his characters are built with a lot of simple geometric shapes. He keeps his color palette pretty simple- primary colors or monochrome schemes.

Half of the classes did a collage and the other half did a drawing.
The focus of both was recognizing and creating symmetry in art. Before creating with both groups, we looked at Nate's website and discussed his job, his use of color and symmetry in his work.

The collage groups made a sun lion. They used both bi-lateral and radial symmetry in their work. 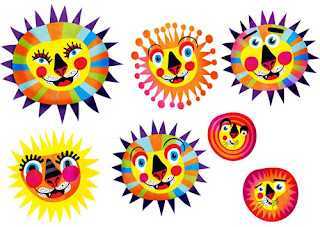 It was a lot of cutting, pasting, and drawing for an hour. Really less than an hour with the project intro. I wish I had 10 more minutes with each of those classes. I think reducing the scale of the project would help in the future. 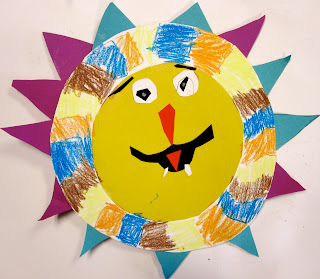 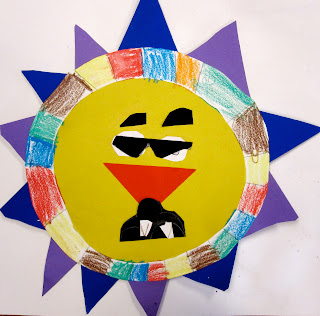 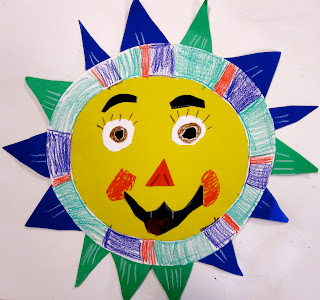 I switched it up half way through my classes because of this rushed feeling with the collage. The drawing is based on an outer space scene Nate did.

Along with focusing on symmetry, these classes also did some color mixing. They used construction paper crayons to make secondary colors by mixing two primary colors. As they were adding elements to their drawings I emphasized that they should use different sizes to create some 3d space. Big in the front and small in the back.
Even though the whole composition is not symmetrical, most of the individual elements are. 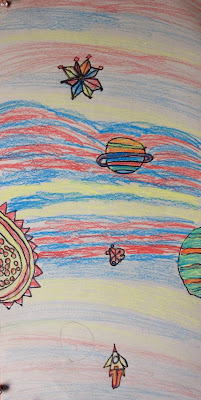 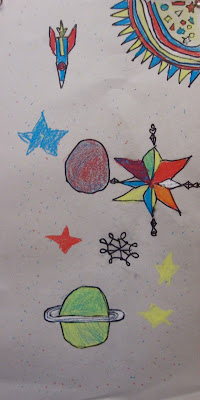