I came across the photo work of David A. Reeves about a month ago and immediately got in touch with our photo instructor about the possibility of doing a project based on his work. Miss Danielle was totally down with it, and we put the lesson into action last week with our 4th grade classes.

David creates cut paper scenes and then spreads them out in his studio and takes photos of them. He is able to play with the depth of field of his camera to create a deeper sense of space than that of the set up in his studio. The results are pretty striking. He often bases these scenes on movies, video games, or graphic novels that he enjoys. 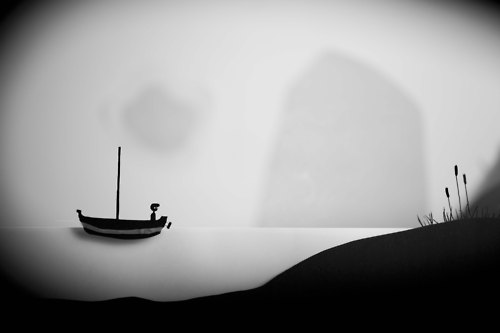 Miss Danielle and I co-taught the lesson. I started by introducing the concept of atmospheric perspective to the class. I used a computer illustration by ponderosa to identify the use of size change, value change, vertical placement, and diminishing detail to create a scene that has a strong sense of depth and 3d space. 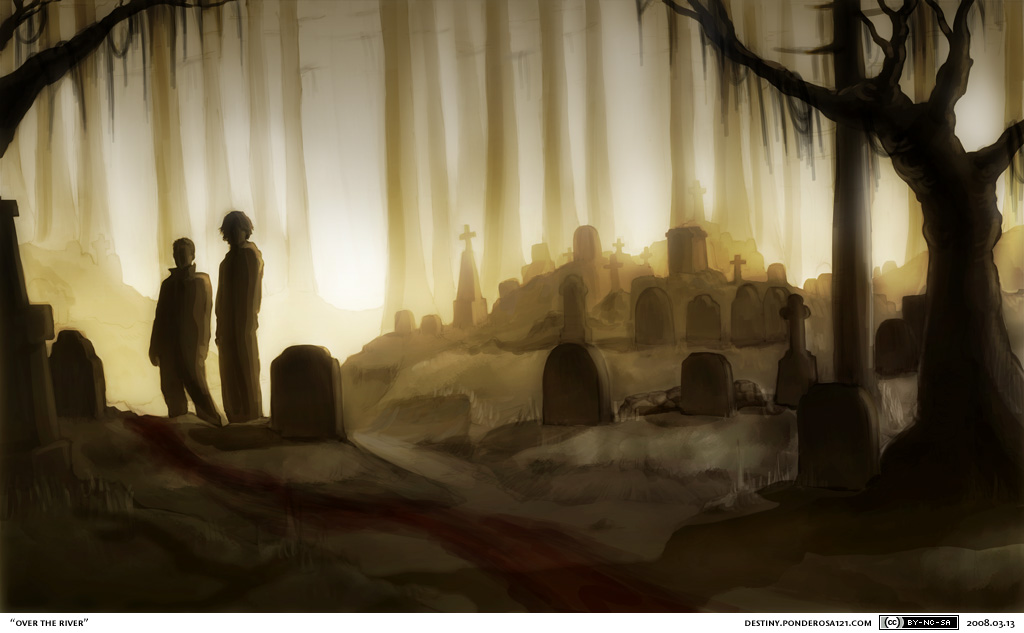 I then shared examples of David's photos and his studio set up that I had pulled from his blog. We identified the presence of atmospheric perspective as we checked out his work. The kids LOVED his stuff. Great subject matter for the season:) 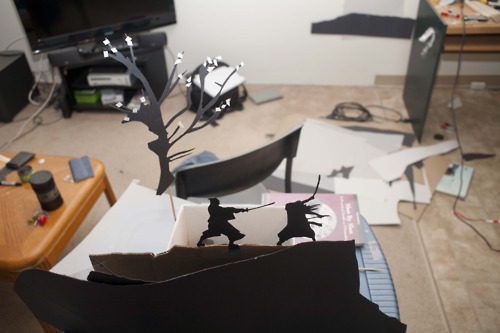 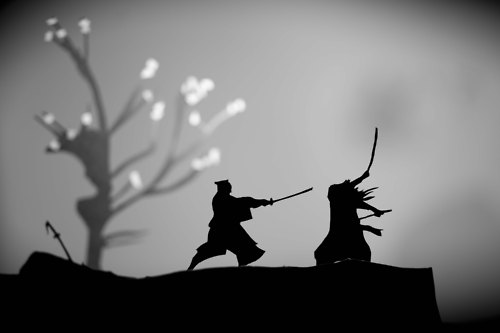 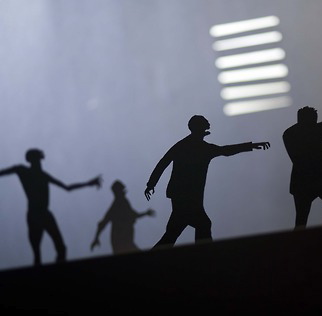 I then showed the classes a cut paper example we had done in the vein of David's work. However, instead of using a "fancy" camera to take our photos, students would be using pinhole cameras made out of everyday containers like tea or chocolate boxes.

At this point Miss Danielle took over and did a presentation on how the human eye works, a camera's similarities to the human eye, and the general 411 about pinhole cameras. 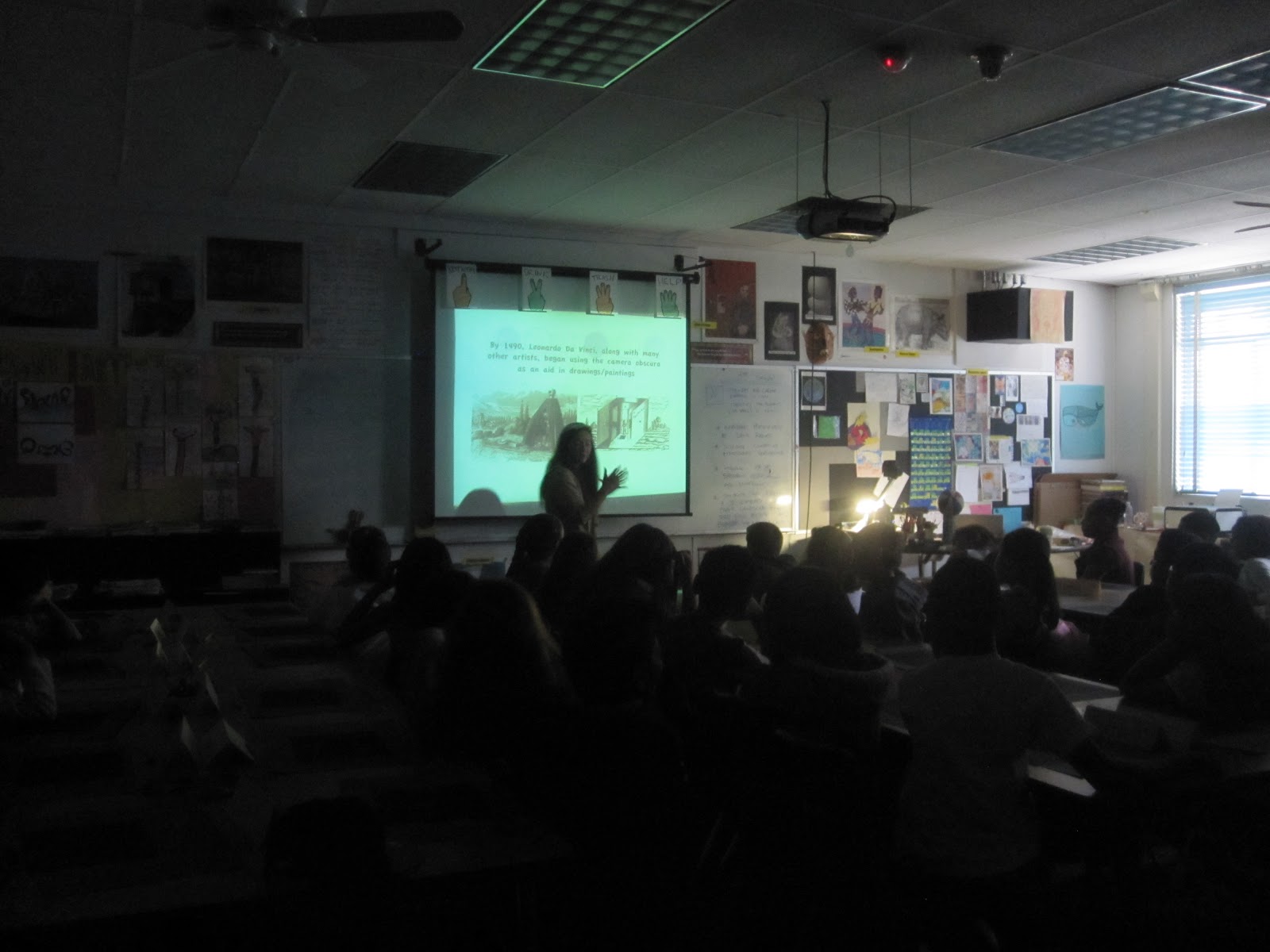 Finally, the kids could get to work:) They drew and cut out two layers for their scene. They were responsible for the foreground and middleground. Miss Danielle created several backgrounds for students to choose from when they shot their scene.

The subject matter was up to them. The main rules were that the black paper layer had to have big characters and both layers had to still be attached to the rectangle of paper that was their ground.

Most students were able to get their scenes drawn, cut, and supported (tall pieces needed to be supported by capri sun straws taped to the back, so they wouldn't flop over during the lengthy pinhole camera exposure time) in the 45 minutes we had left after we had introduced the project. Those who did not are finishing up this week when I see their class again. 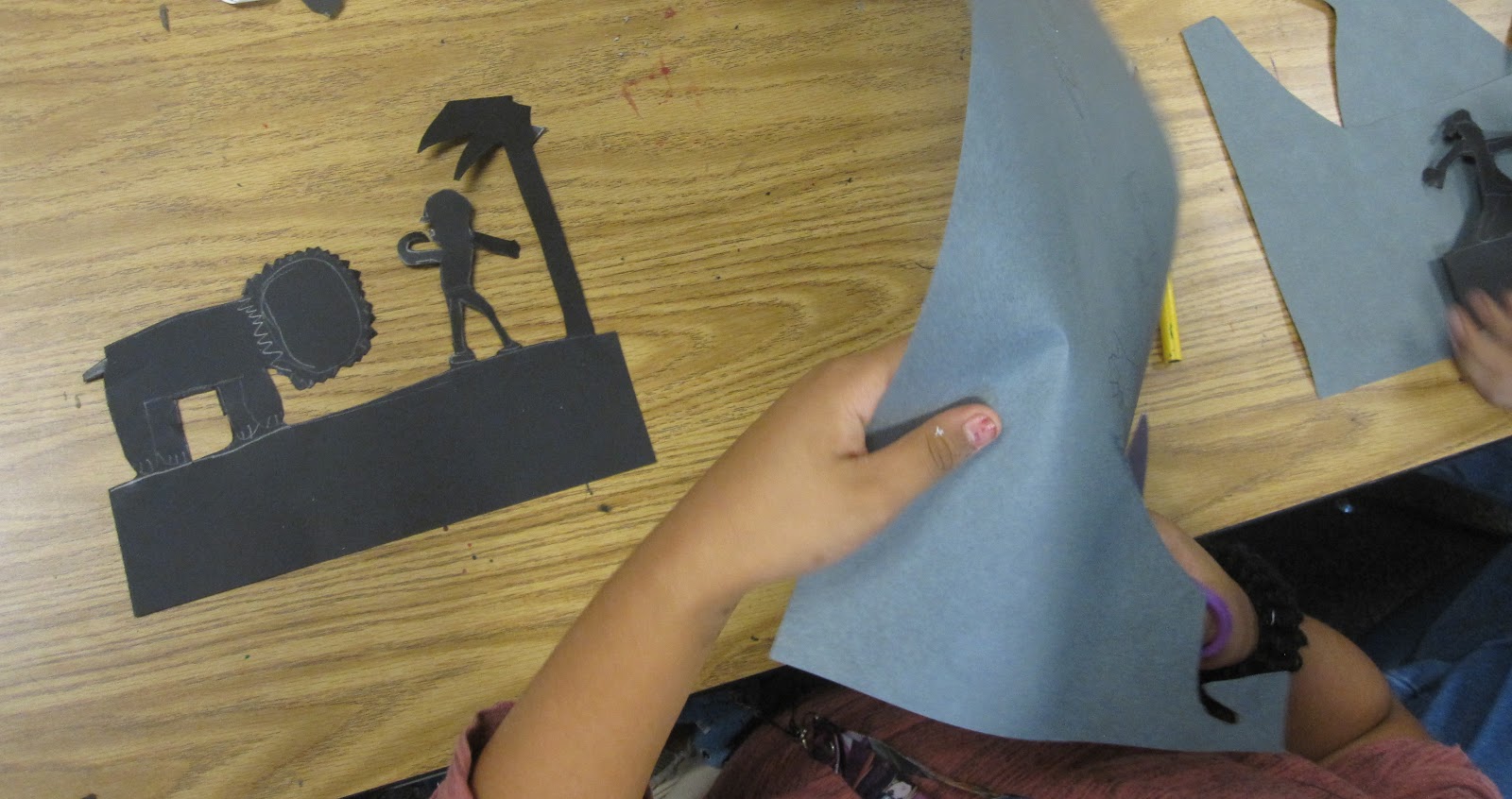 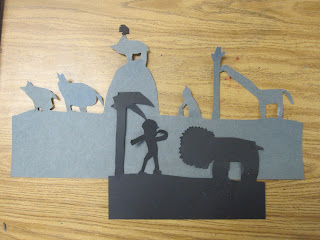 This week Miss Danielle is pulling groups from my class to set up, shoot, and develop their 3d landscapes while I work with the rest of the class on a new project. 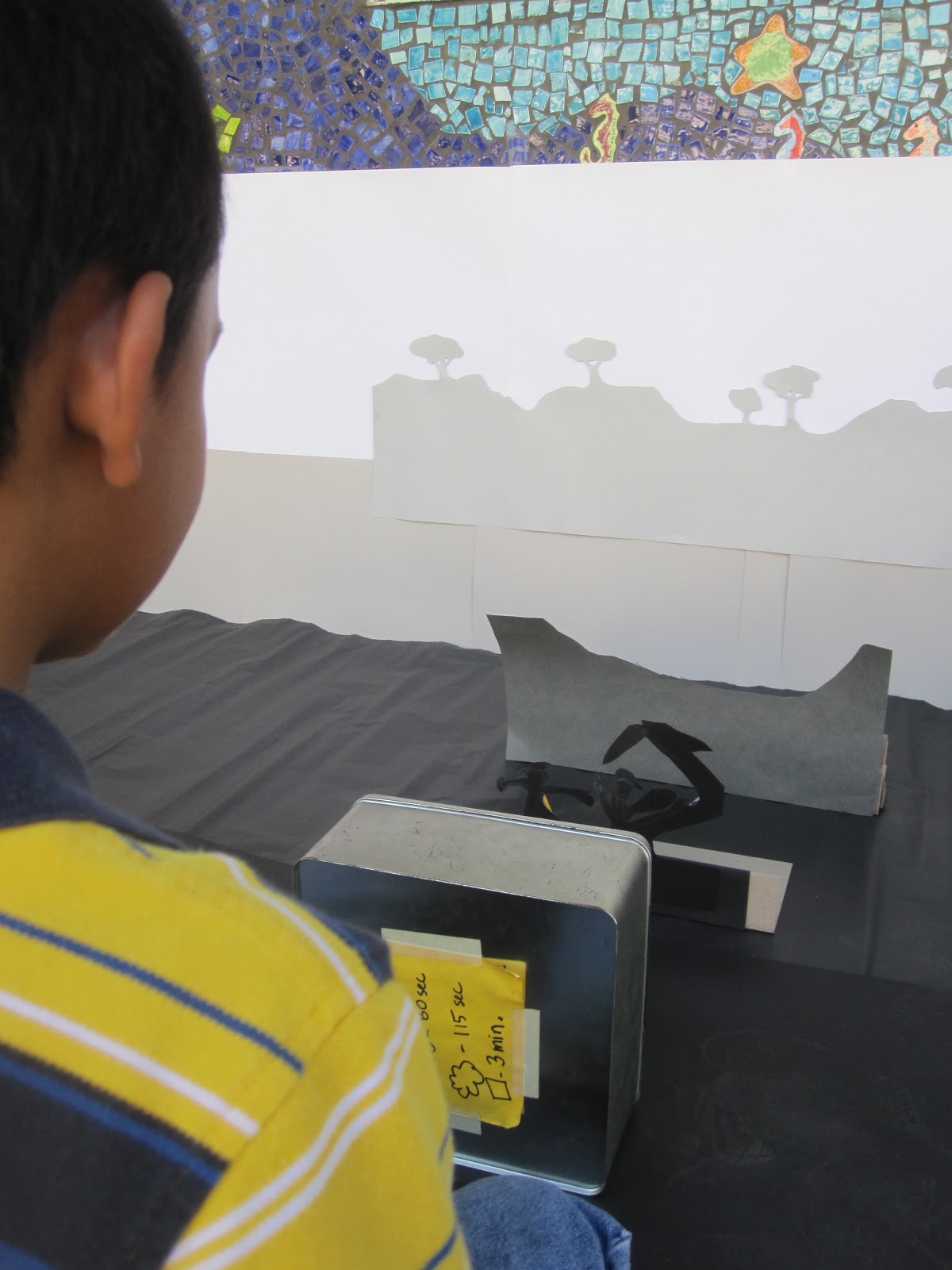 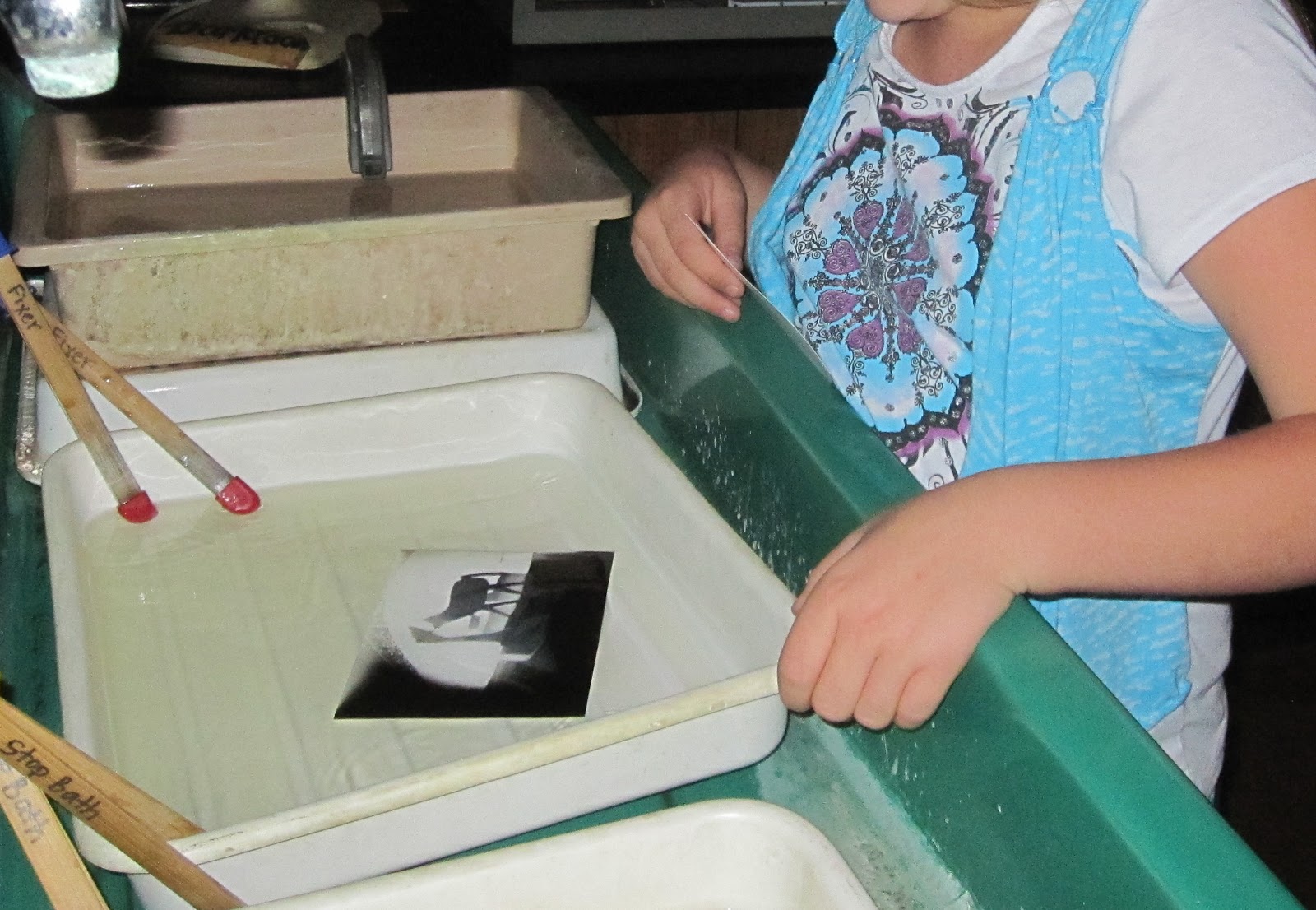 On the last couple the kids moved their camera a couple times to create a multiple image effect.

Miss Danielle is also having the students take digital pictures of their scenes. Our hope is to get the classes into the computer lab at a later date and manipulate the images digitally as well:)